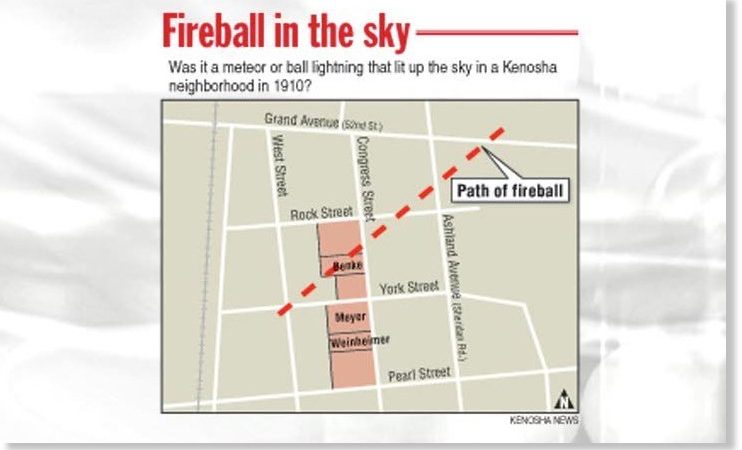 Fireball of 1910 Remains a Mystery

Was it an astral body or a weather anomaly that a Kenosha neighborhood witnessed on a summer’s morning more than 100 years ago?

The incident was recorded on the front page of the Kenosha Evening News of Aug. 25, 1910.

Witnesses said a great ball of fire came through the sky in the area of Grand Avenue (52nd Street) and Ashland Avenue (Sheridan Road) just before 8 a.m.

The sky was dark, and it was raining hard, with thunder and lightning. But the people who saw the phenomenon felt sure it was not a creature of their imaginations.

The news article reported: “The people in the neighborhood of Congress and York Streets (today’s Tenth Avenue and 54th Street) were just sitting down to their breakfast when they saw a great light.

“So intense was the light that, notwithstanding the storm, it lit up their homes like bright sunlight, and they rushed to the windows just in time to see the ball of fire coming through the heavens in a southwesterly direction.

“It was only a few feet from the tops of the houses when it was seen by most of the witnesses, and the women were so frightened that they fled from the windows.”

Mrs. Matt Meyer, who resided at the corner of Congress and York streets, saw the great light pass over the home of Herman Behnke across the street, missing Behnke’s chimney by a few inches.

Later she told others she thought it was a meteor.

Meyer’s neighbor to the south, Mrs. H.J. Weinheimer, saw it, but admitted that she was so frightened by the sight that she ran from the window.

Meyer later told her friends that when the ball of fire burst, there was a constellation of falling lights as from a rocket.

The ball left no trace in the street to show where it fell, but it struck a Kenosha Home Telephone Co. wire and burst into dust.

Telephones in about 80 homes malfunctioned in the aftermath, and officials in the telephone office told the newspaper reporter the ball was a bolt of static lightning.

Static or ball lightning isn’t very well understood even today, but the reports given by witnesses are similar to other people’s descriptions of ball lightning.

“Based on the description and the storm going on, you couldn’t rule it out. That is generally consistent with ball lightning, but it’s pretty rare,” said Sean Miller, meteorologist at the National Weather Service in Sullivan, Wis.

Ball lightning is so infrequent and so unpredictable, Miller said, that scientists haven’t been able to study it very well.

The chances of the ball of fire being a meteor are even more slim. What those residents saw that morning will forever remain a history mystery.