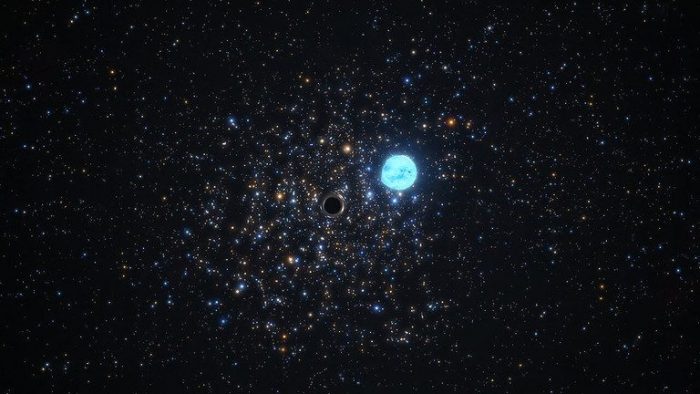 “The celestial object is said to be traveling at approximately 45 kilometers (28 miles) per second and is located some 5,200 light-years away from Earth.”

via RT
Image: A compact black hole and the star orbiting it, located in the NGC 1850 cluster of stars on November 11, 2021 © AFP / Handout/European Southern Observatory/AFP

Astronomers from the Space Telescope Science Institute in Baltimore, Maryland have published a study, claiming to have identified a wandering black hole in the Milky Way galaxy for the first time. Kailash Sahu, who led the research, reported that his team had made the “first unambiguous detection and mass measurement of an isolated stellar-mass black hole.”

The study has been submitted to the Astrophysical Journal, and is also available for peer review on the pre-print server arXiv.

The celestial object is said to be traveling at approximately 45 kilometers (28 miles) per second and is located some 5,200 light-years away from Earth. Scientists believe the black hole was propelled into space when its parent star exploded – hence the unusually high speed for an object of its kind.

The discovery was made with the help of the Hubble Space Telescope, and dates back to 2011.

Black holes cannot be detected directly as they are not visible. However, astronomers study black holes’ gravitational effect on the space that surrounds them.

In fact, the phenomenon where a gravitational field causes a curvature of spacetime – known as gravitational microlensing – has been used before to identify distant celestial objects.

The discovery of the free-floating black hole began in June 2011, when two separate microlensing surveys – the Optical Gravitational Lensing Experiment (OGLE) and Microlensing Observations in Astrophysics (MOA) – both detected an event that peaked on July 20.

The team of astronomers then analyzed data they had collected, and finally concluded that the celestial object in question was most likely a black hole, and not a star. They even managed to calculate its approximate mass – 7.1 times that of the Sun.