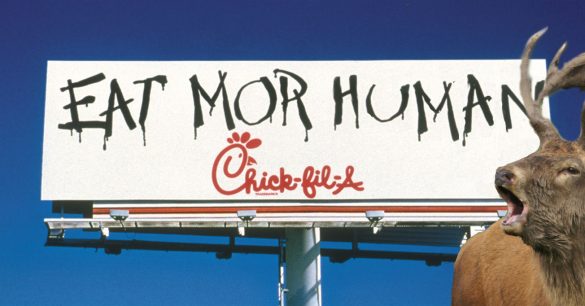 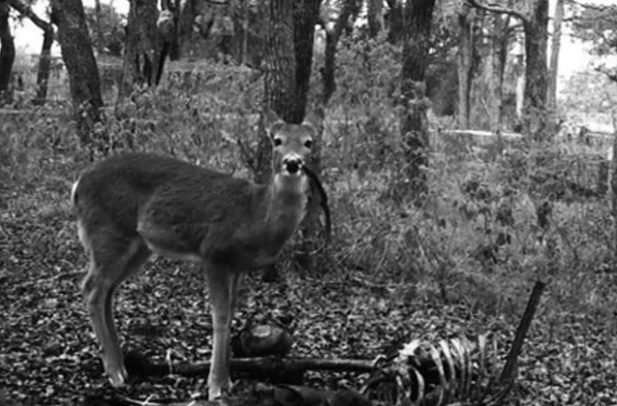 A human rib bone can be seen hanging from the deer’s mouth.

The near-skeletal remains were left outside intentionally for scavenger animals to eat so that researchers could study and identify the bite marks left by different animals in case such data were ever needed to solve a crime. And thus, we reach the reason why I’m not a forensic pathologist. Yuck.

The Forensic Anthropology Research Facility is a 26-acre facility operated by Texas State University and which lets human bodies rot in the great outdoors in order to study human decomposition and practice outdoor forensic research methods. The scientists who witnessed the deer eating people were part of a study which left a series of bodies to decompose in 2014 so that any interactions between the rotting remains and animals could be studied. While vultures, raccoons, and foxes are all known to scavenge any dead meat (including humans), deer are typically known as herbivorous. 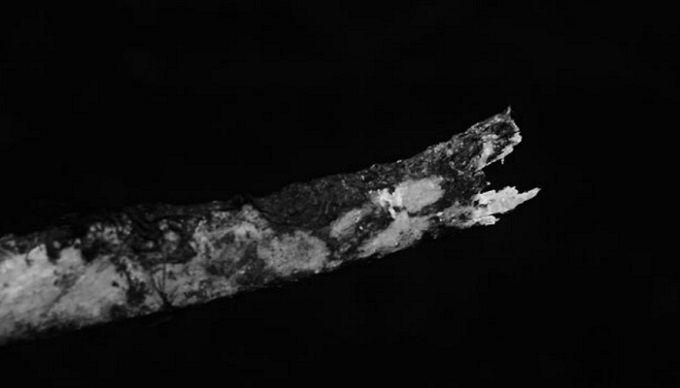 The tell-tale signs of chewing by herbivorous animals include the fraying seen in this human rib bone.

In January 2015, however, remote cameras set up by the researchers caught the unprecedented sight of two deer munching on human rib bones. The bones were picked clean by vultures and had been decomposing for over six months. 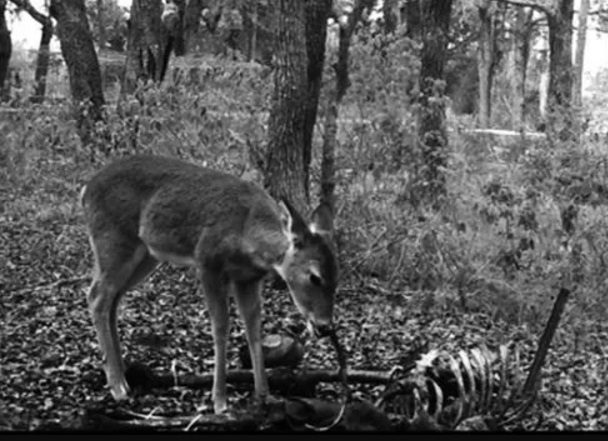 How else is a deer going to get calcium?

The researchers’ analysis and description of the event have been published in the most recent issue of The Journal of Forensic Sciences. According to their article, deer and other large hoofed mammals (ungulates) sometimes consume bones in order to make up for certain nutritional deficiencies:

The general consensus in archaeological science is that osteophagia, the desire to consume bone, is practiced by ungulates primarily to obtain phosphorus in addition to supplementing calcium, sodium, and other minerals that are absent from their vegetarian diet during periods of nutritional stress, particularly in the winter months.

Could that same nutritional urge drive animals to prey upon living humans in the event of say, a nuclear winter or some great climate catastrophe? A few animals are known to eat humans, and similar first cases of animals consuming man flesh have been observed in the past year. Maybe these are all one more way Mother Earth is trying to rid herself of the toxic infestation that is mankind. Or, animals just get hungry sometimes and remote cameras have become more ubiquitous. Either way, the image of a deer with a human rib bone hanging out of its mouth will make a great black metal album cover.