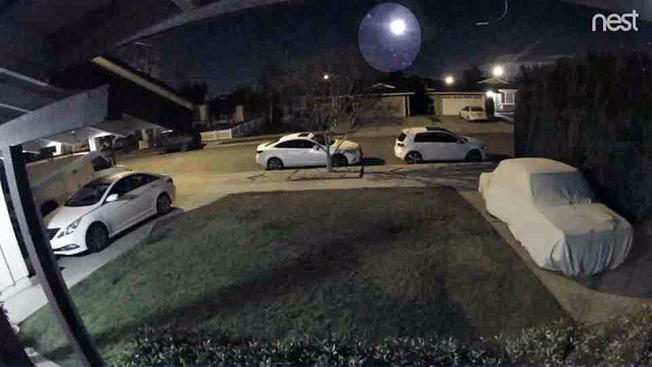 A mysterious light in the sky and a loud boom rattled some South Bay neighborhoods late Sunday night.

Hundreds of people who live near Branham High School in South San Jose reported on the community network Nextdoor hearing it Sunday just before midnight.

“You can see this is coming from way over on this side,” Dale Johnson said while viewing video of the mystery light. The video posted to a South San Jose Nextdoor page shows a small light travel across the sky for about a minute. Then there’s a flash and boom.

“Yeah that doesn’t do it justice at all,” Johnson said of the audio.

He says it shook windows, and set off car alarms.

“New Year’s Eve there’s always mortars or M-100s or M-1000s, going off around here,” Johnson said. “We know what those sound like. This was nothing like it.”

He’s not alone. The neighborhood Nextdoor page had more than 120 comments. People said it sounded like it was right outside their front door.

“I thought at first maybe the transformer blew, but we’ve had that happen before, and it wasn’t that,” said Cynthia Husted.

We asked the FAA if they could identify the flying object. A spokesperson didn’t want to guess but said it didn’t look like any aircraft operation.

Michael Vincent, whose camera captured the apparent explosion, is just as confused.

“I want to find out what it was, but the fact that we haven’t heard is kind of weird,” Vincent said.