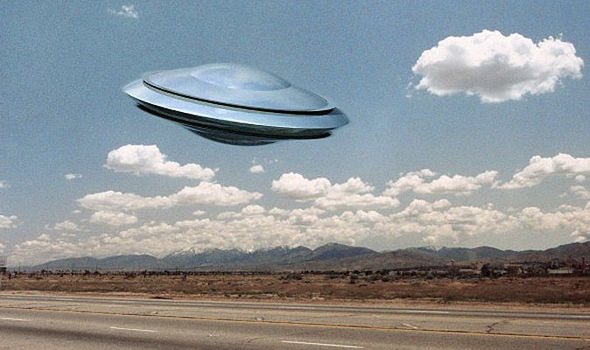 Nick Pope, a former investigator of the UFO phenomenon for the British MoD, was reacting to claims made by experts that recent “UFO” footage released by the US Government was probably just a plane.

Yesterday, Express.co.uk revealed that in a radio podcast of the Big Picture Science Skeptic Check, produced at the Search for Extraterrestrial Intelligence (SETI) Institute, a panel of experts looked at the shocking radar video footage and the consensus was the object shown was just infrared heat from plane engines misidentified by US Navy pilots.

The US-based SETI Institute is a collective of scientists looking for evidence of alien life in the cosmos.

However, Mr Pope argued the footage should not be dismissed by SETI so readily.

He said: “I saw the SETI Institute’s sceptical comments about the Pentagon UFO videos and thought I’d chip in, as I think they’ve misunderstood or failed to take account of something fairly important about this.

“While I agree that the videos themselves don’t prove anything, I think the criticism of them is based on a misunderstanding. What many people don’t seem to appreciate is that these videos haven’t been illegally leaked – they’ve been declassified and legitimately placed into the public domain.

“Self-evidently, therefore, there’s nothing in them that the US government, military or intelligence community regards as particularly sensitive.

“Yes, it’s a big deal that military jets were chasing these objects, but while they weren’t able to catch or identify them, the videos in and of themselves don’t prove the pilots encountered extraterrestrial spacecraft.

“The real issue relates not to the grainy imagery that’s been released to the world, but to the classified analyses that will have been undertaken by intelligence staff.

“When I worked on the MoD’s UFO project we received a steady stream of photographs and films from the public, and from time to time, over the years, RAF pilots encountered UFOs and sometimes managed to get some gun camera footage.

“These imagery analysts are very bright people and have tremendously sophisticated tools at their disposal to enhance and analyse photos and videos.

“This is exactly what AATIP and other US intelligence community personnel will have done with these UFO videos, using their own IMINT (imagery intelligence) specialists.

“The detailed results of these analyses, perhaps including enhanced, crystal clear images of what the pilots encountered, haven’t yet been made public, and may never see the light of day.

“In summary, sceptics may not be impressed by the blurry videos that have been made public – and I take their point – but somewhere in the US intelligence community there will be considerably more impressive material.

“However, whether any of this can be declassified and made public remains to be seen.”

The video made global headlines in December, when a New York Times article revealed the existence of a top-secret US Department of Defense department which investigated the UFO phenomenon for five years from 2007 to 2012.

The Advanced Aerial Threat Identification program (AATIP) had a £16million budget to investigate any threat posed by unidentified objects observed by the military.

It was headed by Luis Elizondo, who resigned from the DoD last October to help set up the To The Stars Academy with former Blink 182 singer Tom DeLonge to further UFO research privately.

The article also revealed the radar camera footage from a US Navy aircraft flying off the coast of San Diego in November 2004, which was said to show a UFO that “defied physics.”

This footage was part of the so-called Nimitz UFO incident, in which several US Navy personnel reported seeing several tic-tac shaped UFOs over the sea, a case that was investigated by the AATIP.

Mr Elizondo later went on record to say the case, and others looked at by the AATIP, showed “there was very compelling evidence that we are not alone”.

Other debunkers have agreed it could well be a plane.

UFO believers discussing the SETI broadcast on debate website Reddit.com were not amused by the claims.

One posted today: “So our naval pilots are not trained or experienced enough not to be surprised and shocked by what are almost certainly distant jet exhausts?

“Also, he said ‘the apparent strange movement of the object was just the camera itself moving, and the banking of the plane in pursuit.’

“Likely story, guys! Our military pilots are just ignorant potatoes in those cockpits with zero training? We just trust them to operate the most advanced and expensive aircraft known to man, but it’s Idiocy up there apparently according to this guy. Give me a break.”