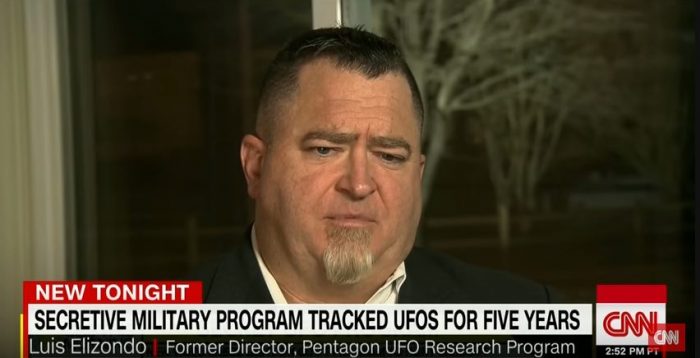 Well by now most of us have seen the stories all over the internet and even main stream media about the secretive program that was run by US Department of Defense which was kept under wraps but now revealed.

We’ve all seen this type of footage before (ie. the Chile Miltary jet UFO encounter) and that never amounted to much so I was a little skeptical at first to even take this stuff seriously but I just watched an interview with former Pentagon Military Official Luis Elizondo who ran the UFO research unit and I have to say I’m floored. I do wish I had recorded the interview (update: found and added it). But hopefully some of you might have seen it as well.

Essentially, Mr. Elizondo was asked a series of questions by the CNN anchor and I was blown away by what I heard. Here are some of things I found striking. The description of the crafts and their characteristics. He said that these crafts lacked the features of conventional air crafts (for example no wings), no obvious propulsion methods like you would note on a normal aircraft. He goes on to mention that they accelerate in ways that our current technology cannot. They also performed maneuvers that seemed to defy physics (for example elevation without forward movement and silent motion).

He reinforced his statements by saying the evidence was not just from the military pilots eye witnessed accounts but also recorded evidence from radar, and other hi-tech equipment used to track and record these objects.

He said that the crafts performed maneuvers and moved in ways far beyond current US technology and beyond those of any country on Earth.

Finally, he was asked by the news anchor if he believed these were alien crafts from out of this world to which at first he gave a somewhat diplomatic answer but when slightly pressed by the anchor he said that based on the things he’s seen and the fact that the technology is beyond any country on Earth, he believes WE ARE NOT ALONE!

Sleep on that one tonight folks…

Here is the majority of the interview:

Here is some more coverage containing some more info. on this fascinating development.

FLIR1: Official UAP Footage from the USG for Public Release

What do you all think?