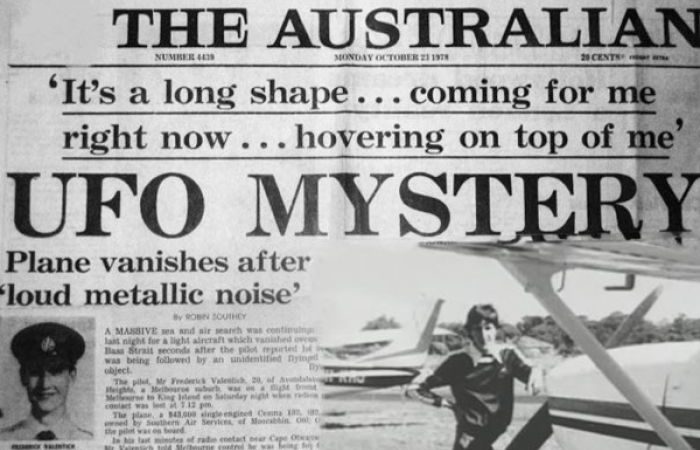 A pilot who disappeared nearly 40 years ago after reporting a UFO is one of the inspirations for the plot of the new television drama series The Kettering Incident.

While the show revolves around fictional mysterious disappearances in the Tasmanian bush, the disappearance of Frederick Valentich was very real.

Valentich was a 20-year-old pilot who went missing over Bass Strait in 1978, leaving nothing behind except a mysterious radio transmission.

Historian Reg Watson has been researching the disappearance for many years.

“I’ve looked at it for gosh, three decades,” he told Leon Compton on 936 ABC Hobart.

“I have to say, in my opinion, he had an encounter with a UFO — and I don’t say that lightly.”

‘It’s not an aircraft‘

Mr Watson said Valentich wanted to increase his flying hours and planned to fly from Moorabbin in Victoria to King Island.

He left Moorabbin at 6:19pm and made radio contact with air traffic control in Melbourne at 7:06pm.

“He asked if there was any sort of aircraft in the area,” Mr Watson said.

Valentich was told there was “no known traffic”.

He went on to report a large unknown aircraft had flown over the top of him and added: “It seems to be playing some sort of game. He’s flying over me.”

“It’s not an aircraft.”
The pilot continued to speak with air traffic control in Melbourne about the craft until 7:12pm and that was the last anyone heard from him.

Mr Watson said authorities searched for Valentich for four days but nothing was ever found.

There are some theories that Valentich staged his disappearance due to some discrepancies in his plans that night.

“There is some mystery about Frederick going to King Island,” Mr Watson said.

“His father told me he was 40 minutes late [setting off] to King Island.

“He put his flight plan into Moorabbin but he never told King Island flight service that he was coming, therefore they never had the lights on at the airport.

“This has given rise to two assumptions: one, that he planned his own mysterious departure; or two, that he was a suicide.” 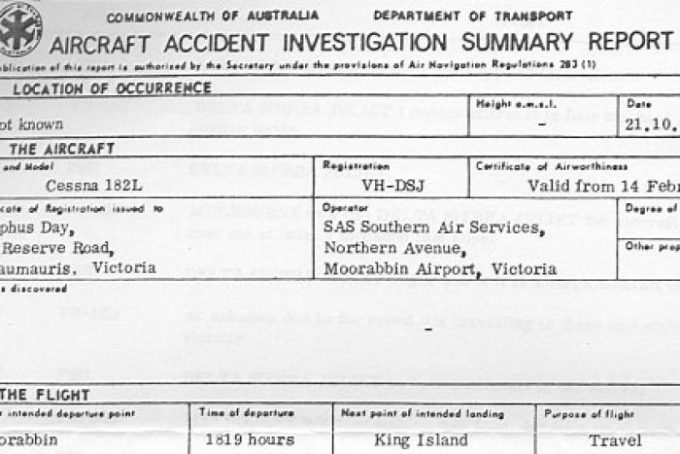 Mr Watson said he had spoken to Valentich’s family and friends and he did not believe the young man intended to disappear that night.

“Frederick was a well-adjusted young man,” he said.

“He had a girlfriend, there was no problem there, he wasn’t suffering from depression and he got on well with the family.”

The documents around Valentich’s disappearance were released to the public in 2012 and Mr Watson said these backed up his belief it was a UFO that caused the disappearance.

“All I know, in the broad terms of a UFO, an unidentified flying object … that caused his demise,” he said.

“For two months prior [to October 21] lights in the sky, cigar-shaped objects, were seen from King Island.

“And I’ve spoken to witnesses on the north-west coast [of Tasmania] who actually saw a craft on the day 15 minutes before he went missing.”
Mr Watson said there were numerous reports of UFO sightings in 1978.

“It’s been called the biggest flap in Australia’s history,” he said.

A coronial inquiry into the disappearance in 1982 returned an open verdict with Valentich listed as missing, presumed dead.

His family erected a memorial plaque on Cape Otway in 1998 which was unveiled by Steve Roby, the air traffic controller that night in 1978 and the last person to speak with Valentich.