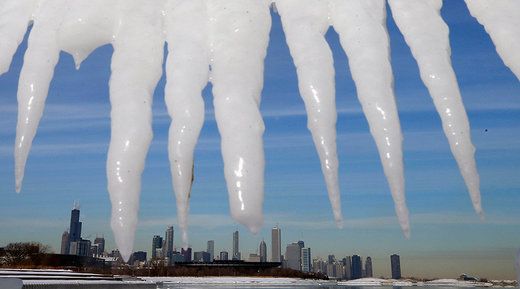 Jack Frost is about to dance across the Northeast with a freezing polar vortex making a dramatic return to the US. Chills, snow and rain are expected to make a landfall over the weekend, likely bringing old classics like slippery roads and flight delays.

Meteorologists predict that the freezing blast will cover midwestern and northeastern states for at least five to seven days. So, getting out extra scarves and gloves might be a good idea.

This year’s polar vortex, or a shift in a stratospheric weather system, is already been predicted to be just as bad as the one that developed in January 2014, when record freezing temperatures gripped the US.

More than 200 million Americans are expected to be affected by freezing temperatures, snow and rain, or a mix of both.

AccuWeather warned of temperatures plummeting from 10 to 20 degrees below average from Little Rock, Arkansas, to Chicago before expanding eastward to Richmond, Virginia, and Boston.

“It’s going to be a shock,” said Kevin Roth, senior meteorologist at The Weather Channel told NBC News. “The fall was closest to the warmest on record so this is really back to reality.”

Chilly weather is expected in New York, with temperatures as low as 32 degrees Fahrenheit (0 degrees Celsius), which with arctic air might feel even lower.

“High temperatures both days should be in the 30s, with low temperatures tonight falling into the teens well inland and 20s most elsewhere,” National Weather Service (NWS) in New York said in an update on Friday.

AccuWeather has also predicted “enough snow” to shovel for areas from Chicago to Detroit already on Saturday night and Sunday. “Disruptive snow” will also hit the Dakotas, Minnesota and Iowa beginning on Saturday and then will cover parts of Wisconsin, Illinois and Michigan on Saturday night, AccuWeather specialists warned.

“The exact track and intensity of the storm will ultimately determine how much snow falls in cities like Des Moines, Iowa; Minneapolis; Madison and Milwaukee, Wisconsin; and Chicago,” AccuWeather Meteorologist Kyle Elliott said, forecasting “a two-pronged attack on the Midwest.”

The NWS has also warned of “plowable snowfall” in areas away from the coast from Sunday afternoon into Monday morning. Snow won’t miss the areas from Hartford, Connecticut, to Boston and Portland, Maine, where up to a few inches are expected Sunday night and Monday.

However, AccuWeather has also predicted “another storm with some snow, ice and rain” in the Northeast on Wednesday, “ahead of a blast of arctic air that will likely bring the lowest temperatures of the season yet before the end of the week.”

School delays, road closures and change in airlines’ schedules are widely expected throughout the next week due to these dramatic weather conditions.