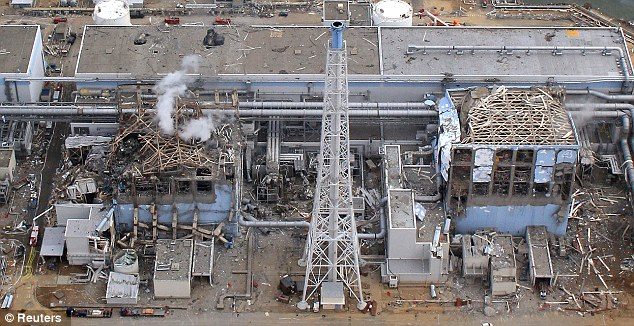 “Humanly impossible” to clean up due to shockingly high radiation levels

EnviroNews World News, Feb 6, 2017: The astronomical readings bring major concerns to a cleanup operation already spiraling out of control — flying blindly into territory previously uncharted in the history of nuclear power…. To top it off, 530 sieverts per hour might not be the worst cleanup workers have to worry about. TEPCO also stated that surface-level radiation readings from parts inside the plant’s pressure vessels can reach “several thousand sieverts per hour,” compounding what are already seemingly unsurmountable tasks in the decommissioning process. Esteemed nuclear expert, engineer, and former reactor operator Arnie Gundersen told EnviroNews World News in an email that the position of Fairewinds, his educational non-profit, is that radiation levels are presently way to high to remove the melted fuel, and that the reactors should be entombed, like was done with Chernobyl’s sarcophagus, for at least a century before attempting dismantlement. “[These readings do] make dismantling the facility almost impossible for 100 or more years, as the exposure to workers would be too significant,” Gundersen said.

Snopes, Feb 7, 2017: In a statement they sent to us, Tepco [said] “The level of radiation discovered was higher than expected… Extra precautions have been taken to prevent leaks of radiation during the investigation.”… What that means, engineer and San Diego State business professor Dr. Murray Jennex told us, is that clean-up just became much more difficult than expected… “The structures are holding but inside where the fuel melted, it went all over the place…” Jennex, an expert on nuclear containment… surmised that Tepco would ultimately be forced to build a concrete sarcophagus around the unit like the one that encapsulates reactor no. 4 at Chernobyl. He added that they “may have to let nature take its course for a while.”

Sputnik, Feb 11, 2017: This level of radiation [at Fukushima Unit 2] is beyond extreme, even in comparison to the inside of the Chernobyl reactor, where radiation levels are ‘only’ 34 Sv/hr.

Dr. Helen Caldicott, Feb 13, 2017: … it will be almost impossible to “decommission” units 1, 2 and 3 as no human could ever be exposed to such extreme radiation; and that this fact means that Fukushima Daichi will remain a diabolical blot upon Japan and the world for the rest of time, sitting as it does on active earthquake zones… Bottom line, these reactors will never be cleaned up nor decommissioned because such a task is humanly impossible…

Guardian, Feb 3, 2017: Tepco [has] yet to identify the location and condition of melted fuel in the three most seriously damaged reactors. Removing it safely represents a challenge unprecedented in the history of nuclear power.

Washington Post, Feb 8, 2017: [TEPCO] has released some jaw-dropping figures… The cleanup is taking much longer than expected… And Japan’s National Institute of Radiological Sciences said medical professionals had never even thought about encountering this level of radiation in their work. Fumiya Tanabe, a nuclear safety expert and former chief research scientist at the Japan Atomic Energy Research Institute, said while experts expected the radiation reading inside the Daiichi reactors to be high, it was still “shocking” to learn how high it was six years on. “It will be very difficult to operate robots in there for a long time to come, and to remove the melted fuel. So the finding might greatly affect the decommissioning time schedule,” he said.

Each passing day Fukushima’s mangled remains continue to release massive amounts of extreme radiation into the Pacific ocean essentially poising that ocean itself and everything in it as well as the world. It also is continually contaminating the air itself as massive amount of deadly radiation escapes the plant on a continual basis. Why has this not been entombed yet? My bet is that money plays a huge role and either the cost of entombing is trying to be dodged OR they might have been trying to refurbish this site to continue using what ever they could from it. It’s unimaginable that logic takes a back seat even when mass extinction on a global level is possible and all because money and profit is the priority!