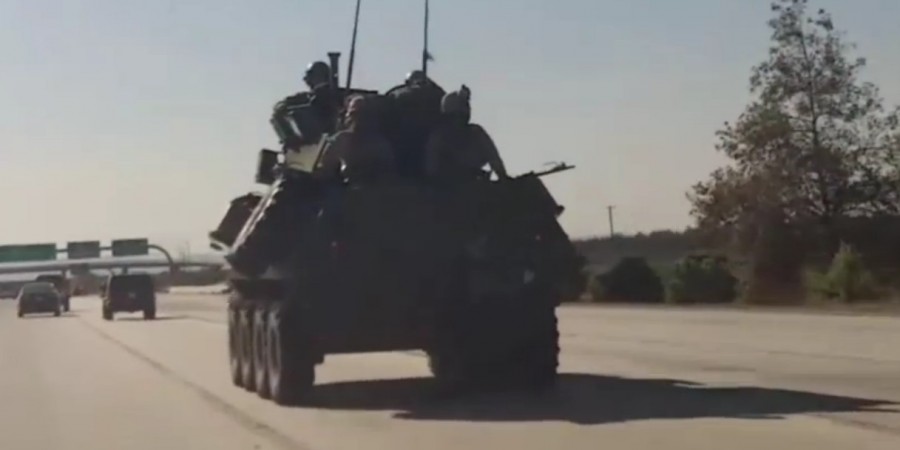 Just when we thought it couldn’t get any more strange in San Bernardino, California, we see what looks to be preparation for war in the 1st video below as a huge military convoy with fully armed soldiers hanging out of their machines of war is videotaped moving south down the I-15 freeway near the 210 junction.
Hattip to ANP reader Battlesheep who posted this video into our Breaking News Alerts and as videographer grindall61 mentions in their notes, some of this equipment looks to be the same equipment as seen in the 2nd video, a military train that was videotaped heading towards Los Angeles back in July of 2015.

This 1st video is just the latest we’ve seen of military convoys on the streets and highways of America and as we’ve been reporting, our government is seemingly preparing for something huge in America. We take a look at the US military’s ‘doomsday plan’ as outlined yesterday in the Daily Mail further below.

With ISIS terrorist threats increasing across the country and our economy being prepared to be switched over to a cashless system that could possibly lead to civil unrest in the country, we see preparation as wise – we should all be getting ready for economic collapse and preparing for whatever might be coming at us. Obviously, government has foreknowledge of certain events that the rest of the American people are unaware of – we should look at what they’re doing as a hint to us all.

What was this massive convoy doing on I-15 in San Bernardino? We know for a fact that Obama visited San Bernardino and was highly criticized for attempting to politicize this tragedy. All of this equipment couldn’t be for his protection could it? With ISIS threatening a wave of coordinated attacks upon Europe and continuous threats upon America, see that this is quite possibly preparation for the globalists end game.

At ANP, we continue to pray for the health and safety of all of our members in the US military and 1st responders across the nation. We realize by the events that we’re watching unfolding that our country is facing a plethora of possible disasters and the planned collapse of our financial system on the horizon as shared in this story from Jeremiah Johnsonat SHTFPlan.:
Domestically the secret meetings and backroom deals between the major “too big to fail” (but not too big to fleece the U.S. taxpayer to bail out) financial institutions clearly points to an event on the horizon where they intend to directly or indirectly collapse the financial system. The criminal Federal Reserve has raised interest rates, as the phony employment numbers and faked recovery statistics are glowingly embellished and parroted by the mainstream media whose lips kiss every proffered part of the administration, the masters of the press.

Pure common sense dictates that our economy, as with Ancient Rome’s, is coming apart at the seams, sped along by those whose only interests are of power and the promulgation of power. To summarize, I utilize the aforementioned work of Mr. Peter Heather, with his closing words:

“By virtue of its unbounded aggression, Roman imperialism was ultimately responsible for its own destruction.”

The United States has followed in this way: its officials are corrupt, and the population is morally defunct and self-serving in the majority. A new time of the Dark Ages is upon us, and the saddest thing of all is that we have brought it upon ourselves. By complacency, or by direct actions, each of us has brought it upon ourselves. May God help all of us, and our country to not go the entire path of Ancient Rome.

As more and more Americans awaken to the total sell out of our nation to global government criminals who are working towards the complete destruction of our country to bring in their ‘new world order’ we see that the globalists may need to resort to something drastic to complete their mission here. As the Daily Mail told us yesterday, we now know that our military has a plan called “Rapid Attack Detection, Isolation and Characterization”, their ‘doomsday plan’ to deal with a catastrophic cyber attack that shuts down our electrical grid.

With Russia’s new ‘doomsday plane’ having just taken to the skies as shared in the final video below, we see that we are getting much closer to potential catastrophic doom – events that we pray are avoided for the sake of all humanity.
The US is at an ever growing risk of a cyber attacks, with energy infrastructure likely to be hackers’ prime target.

This was the stark warning made by General Keith Alexander, the retired general and former chief of the National Security Agency, earlier this year.

Now, the Pentagon says it has a plan to do something about the threat.

Its research division, Darpa, has launched a new program to target security threats that have the potential to wipe out all of America’s power systems.

Initially, however, it will focus on infrastructure that is vital to the Department of Defense’s missions.

Dubbed Rapid Attack Detection, Isolation and Characterization (RADICS), its goal is to develop automated systems to deal with a loss of power.

They say these systems should help utilities engineers restore power within seven days of an attack.