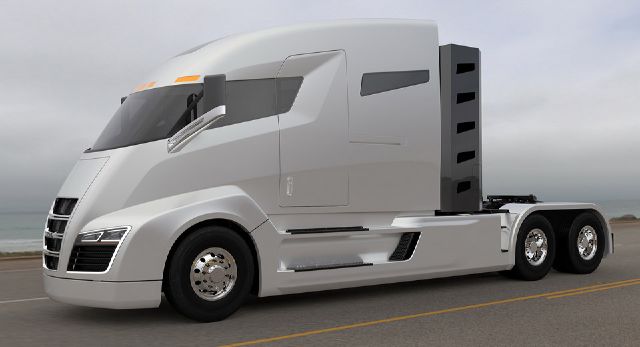 Motor company Nikola just unveiled a first of its kind, 100 percent emissions-free hydrogen-powered semi-truck. The vehicle can travel between 1287 and 1931 kilometers (800 and 1,200 miles) on a single tank of fuel, a distance as far as San Francisco to Cheyenne, Wyoming.

Named Nikola One, the semi-truck promises to deliver over 1,000 horsepower and 2,000 foot-pounds of torque, which would give it almost twice the power of current diesel-powered semis. High-density lithium batteries power the vehicle’s fully electric drivetrain.

Lack of supporting infrastructure is one of the main hindrances to adapting vehicles running on alternative energy. To solve this, Nikola plans to build 364 hydrogen refueling stations in the United States and Canada to sustain the fuel demands for their trucks. They hope to break ground on the first in 2018 with a goal to open the refueling stations for business by 2019. To sweeten the deal for potential buyers, they’re even pledging to include unlimited hydrogen fuel during a 72-month lease term.

In addition to sharing these details on the Nikola One, the company also revealed that they’ve partnered with trucking company Ryder, which would service and maintain Nikola trucks in over 800 locations. A smaller, more agile version of the truck was unveiled as well: the Nikola Two. Production for the Nikola One should begin during the first half of next year, and the company hopes to release both models by 2020. As that point, they will be one more example of the global shift toward clean energy.