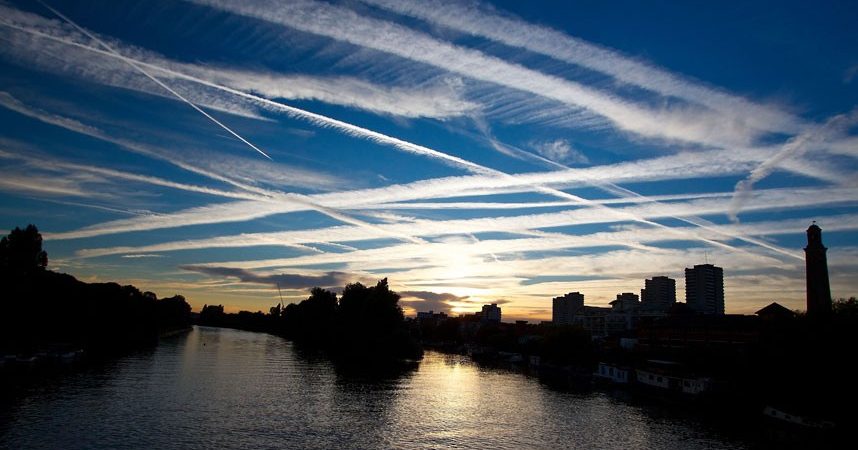 Geoengineering or climate engineering is exactly what it sounds like. It is playing God by taking things such as our weather, our climate, and the entire environment into our hands and manipulating it. It is recklessly destroying our planet. It is performing huge operations without our knowledge that are speeding up the clock on global warming. The fears we usually attach to global warming and watching Earth become the next Venus are flung far into the future. We see them as things that we need to take steps to improve now, but even on our current path, these doomsday scenarios won’t play out in our lifetimes. The threat of geoengineering is that this time table we have for a runaway greenhouse scenario has been moved up. The time where it is too late to act is fast approaching, and the worst part of it is that we won’t be told about that time until it is too late. Our only chance is to become aware of our dire situation while the time to reverse it still exists. According to a leading zealot of this cause geoengineeringwatch.org, we need to reach a critical mass of awareness of currently running geoengineering programs.

Officially geoengineering isn’t being implemented anywhere in the world. All of the plans and strategies are simply proposals, ideas that have not yet been carried out. One of the biggest threats is solar radiation management (SRM). This process is carried out in several ways.

One is by using jets to spray light-scattering aerosols into the atmosphere. The reason for doing this is to dissipate much of the harmful solar radiation that will be causing us problems before it gets to the Earth’s surface. The goal is to mimic a volcanic eruption where the ash that is ejected into the atmosphere will reflect some of the sunlight racing towards earth. Since we don’t have access to the amounts of ash required to accomplish this, stratospheric sulfate aerosols are what is used.

Iron fertilization of the Oceans is another method. The hope is to enhance the natural sulfur cycle existing in the ocean. By fertilizing with iron they would be encouraging the ocean to produce more dimethyl sulfide, which would increase how reflective the clouds above it are. The rationale also includes removing carbon dioxide from the atmosphere as the iron added would increase the reproduction of photosynthetic life.

Why should it worry us?

The price that we are about to pay for their actions is severe. They have implemented this program because they believe it is quickly set up, cheap, and won’t do any damage that can’t be reversed. Being right for two out of the three isn’t good enough. Attempting to fiddle with the environment only makes it worse. There is a cascade of side effects raining down on us right now, and we are dangerously close to a tipping point that will spark a catastrophe. You should worry about this because it will cause many things.

• Disruption of normal weather patterns – Extreme droughts in places and flooding in others.

• Ozone depletion – The amount of solar radiation that makes it to the ground is rising. The ozone layer is being eroded, making it much more difficult to reverse any changes that occur.

• Methane release – As permafrost thaws and sea waters warm they are releasing massive amounts of methane.

• Reduction in Arctic sea ice – As we lose more and ice at our poles they reflect less and less sunlight, increasing the speed that these changes are occurring. They have attempted to hide just how little ice is left, and we may already be in trouble.

• Falling Oxygen Air Content – The amount of oxygen available in the air to breathe is falling. There may be cities that suffocate before they starve.

• Oceans ready to collapse – Iron fertilization is only a short term solution. After short term growth, they are creating bigger and bigger dead zones in the ocean.

• 200 species becoming extinct every day as those who are less adaptable die out.

• Forest reduction – not only in our logging efforts but in the raging forest fires that are getting worse and worse. As drought dries everything out and spraying coats coastal forests with flammable metallic dust we are left with a tinderbox and a match about to be lit.

Is There Any Proof?

There are no agencies standing up and claiming responsibility. How can they be responsible for something that doesn’t exist? They have let slip however multiple clues.

Geoengineeringwatch.org has dug through the pile and found some answers. They have a 750-page Senate document that states guilt. They have presidential reports showing that these programs are ongoing. They have a hefty list of climate engineering specific patents that have been filed since the 1940s. There have also been lab tests in the US and abroad that confirmed toxic heavy metal fallout. There are concerned citizens who are taking things into their own hands as they take photos of impossible cloud weather patterns. Ordinary people document the trails left by spraying and take videos of airplanes spraying. Citizens are testing their own rainwater along coastal regions and confirming these stories.

We don’t know how big it is or how far it has already gone.

We are dealing with a program that we are supposed to know nothing about. Officially it doesn’t exist and the government is working to keep it that way. As of right now, every member of the National Weather Service and NOAA is forced to sign a nondisclosure agreement. Any anomalies and proof that they can uncover in the course of their daily jobs will be classified and kept secret from us. The director of the CIA has admitted that they have an interest in the subject. Taking their statement at face value they have nothing to do with SRM yet but are considering it. However, we should remember how secretive of an agency the CIA is. According to a current whistle-blower the very fact that they admit interest in the project should clue us into two facts: 1. If they are even talking about something like this they have most likely been doing it for decades. 2. They are about to be exposed.

It is tempting to believe that this has been perpetrated by an evil organization with nefarious intent. It’s easy to think that they are seeking to destroy almost everyone just to save themselves. Those are easy conclusions to come to, but this also could have started very differently. The reasons behind this could be much more subtle, but no less horrifying. I find it more likely that they started on this path to control the world’s weather under good pretenses. They wanted to do good, protect innocent lives and their country. Gaining control over the weather seemed like a good option. They were dealt a weak hand but they still thought they could win. They thought they could reverse the path we were on to make things better. It wasn’t until so much had already been invested that any negative consequences were found. By the time they realized they were holding an unwinnable hand, they were already committed. They did what many of us would do with so much skin in the game. They bluffed. They dug in deep and refused to backtrack. They made the decision to ride this lie hard until the end and we won’t find out what cards they had in their hand until the very end. It is an unfortunate talent we humans have that we can justify almost anything in the right situation.

If we are in a dire situation it is because we have been kept in the dark about it. With no one to give oversight, there has been nobody to provide a reality check. It is up to us to learn what is going on and to make them aware that we know. Knowledge is their greatest enemy and our greatest strength.

IF YOU ENJOY THIS SITE PLEASE TELL OTHERS ABOUT US…SHARING IS CARING
Start the discussion, leave a comment below
The views expressed and information presented in this article are those of the writer and their sources – Reposting of this article is allowed, please include full attribution to this site (BENDEDREALITY.COM) and the author of this article. If you are interested in being a guest writer for our site, please CONTACT US and let us know, we would be glad to consider you for a guest writing opportunity (EXPERIENCE NOT MANDATORY).