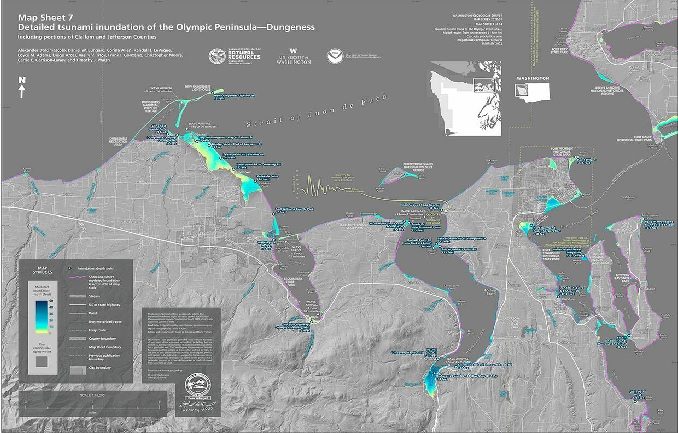 “Community members are encouraged to have at least 30 days of supplies as it may take days or weeks before help can access you and your home after a large earthquake.”

by Matthew Nash
via Sequim Gazette
Image Caption: New maps from the Department of Natural Resources show the potential flooding impact from a tsunami caused by a 9.0 earthquake along the Cascadia subduction zone.

New maps through a study by geologists with the Washington Geological Survey division of the Washington Department of Natural Resources show that a 9.0 magnitude earthquake could be devastating to the state’s coastlines and roadways, including along the entirety of the Olympic Peninsula.

The new study, which became available days after the undersea volcanic eruption by Tonga on Jan. 15, uses a simulated magnitude 9.0 earthquake on the Cascadia subduction zone, according to DNR staff.

Geologists predict the first tsunami waves could reach La Push 10 minutes from the start of the earthquake, and Washington’s Pacific coast in about 30 minutes.

Port Angeles would see waves about an hour from the earthquake’s start, Dungeness at about 80 minutes, Miller Peninsula about 85 minutes, Blyn 90 minutes and Discovery Bay about 95 minutes.

Along the Pacific coast, flooding could reach or exceed 60 feet, geologists predict, and 100 feet at Yellow Banks Beach in Olympic National Park.

The Sequim area could see inundation of about 10 feet in Dungeness, 7 feet in Port Williams County Park, and portions of Gardiner and the Miller Peninsula, 6 feet at Washington Harbor, and 5 feet in Blyn.

Discovery Bay has the largest potential for flooding at a predicted 33 feet, which would likely block and/or destroy portions of U.S. Highway 101 and State Route 112.

Commissioner of Public Lands Hilary Franz said via press release that the “report shows what we’ve long known — there won’t be time for our coastal communities to react after a major earthquake, so it’s vital we provide these detailed models and keep our communities safe when, not if, the next Cascadia mega-quake hits.”

DNR staff said the last Cascadia rupture occurred 321 years ago, and experts estimate a 10-17 percent chance of a rupture in the next 50 years.

Geologists’ model does not include tide stages or local tsunamis triggered by earthquake-induced landslides.

Efforts have been made for years to prepare for a major disaster across the peninsula, including Joyce, Sequim and the West End.

Dan Orr, assistant fire chief with Clallam County Fire District 3, said they have 14 Community Emergency Response Teams, or CERT, across the Sequim area, with 445 trained individuals and 12 training now who could be integral to helping their neighbors in an event like a Cascadia earthquake.

“We’re happy DNR is starting to recognize the potential that could happen here with the threat of Cascadia, or a large seismic event,” Orr said.

Blaine Zechenelly, disaster planning/EMT for Clallam County Fire District 3, said he was surprised by DNR’s data on subsidence, or the amount of sinking/caving in, of some areas

Geologists report the tsunami would first arrive as a trough with sea levels gradually receding in all inner coastal waterways.

Zechenelly said new data shows 13 feet inundation at Neah Bay and along State Route 112 that “would render much of the road irreparable as it would be at sea level.”

“For the (Strait of Juan de Fuca) here, our advice of being higher than 50 feet remains the same,” Zechenelly said.

“Our CERT effort continues to focus on effective search-and-rescue for the Sequim area. This report validates the need for this and shows we were on track.”

Previously, Orr said sizable islands would form in the Sequim area following a large earthquake, from Discovery Bay to Blyn, from Blyn to the Dungeness River, from the river to McDonald Creek, and from that creek to Siebert Creek.

Other overpasses and smaller bridges may collapse and block vehicle traffic to create micro-islands as well, he said.

Community members are encouraged to have at least 30 days of supplies as it may take days or weeks before help can access you and your home after a large earthquake.

Orr said they continue to offer CERT classes during the COVID-19 pandemic with safety protocols. They are also emphasizing efforts to train people to shelter in place during emergencies, and they’ve signed a contract with Trinity United Methodist Church to be a shelter during an emergency like a Cascadia quake.

Orr said they’re working with other faith based communities to consider being shelters with support from Clallam County possible, too.

To see the new study and maps, visit tinyurl.com/SEQtsunami.