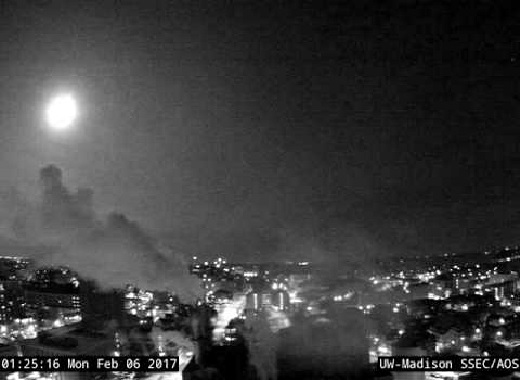 A giant green fireball was caught on a police officer’s dashcam lighting up the skies over the US midwest early Monday morning.

The Illinois officer was on routine patrol around 1:30 a.m., when he saw “a giant green-lighted orb.” so the quick-thinking cop turned on his dashcam to capture the spectacular sight.

“It was too good not to share,” Lisle police officer Jim Dexter told the Chicago Tribune. “I thought about how few people actually saw it, but then there’s the amount of people I got to share it with.”

What is thought to have been a large meteor was spotted across Wisconsin, Northern Illinois, as well as parts of Michigan, Indiana, Ohio, Iowa, New York, Kentucky, Minnesota and Ontario, according to the National Weather Service.

According to the American Meteor Society, there have been over 185 reports about the fireball.

“The preliminary estimated trajectory plotted from the witness reports shows the meteor was traveling from the Southwest to Northeast ended its flight on the Lake Michigan somewhere between Sheboygan, Wi and Manitowoc,” the AMS reported.

A fireball is a term ordinarily used to describe a very bright meteor, generally with the same luminosity as Venus, what astronomers measure as a magnitude of —4.

Fireballs are fairly common, as several thousand streak through the Earth’s atmosphere daily.