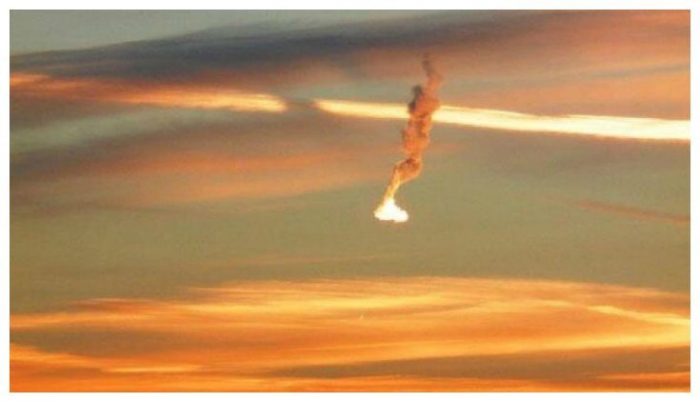 Here at Outer Places, we pride ourselves in being both believers and skeptics in equal proportion.

What makes this more than your standard, cut and dry gap between civilian and government knowledge? The fact that we’ve seen personal footage of the fireball, too. A gentleman sent us in a video of the fireball, captured on his cell phone, that shows the object moving in inexplicable ways, far different than any falling object moves as it plummets to the ground. It’s easy to understand why some are already racing to claim this is genuine evidence of an alien spacecraft.

Meteorologist Alejandro Fonesca, from the Universidade Federal do Acre, confirmed that there were no meteorites scheduled to fall in the area, and thinks that the fireball was either an old satellite or other human-made space litter.

“When the debris enters the atmosphere it comes under intense friction and this causes it to set on fire,” he said. “That is what could have happened.”

Though the Peruvian air force released supposed photos of the object, it’s really too burnt up to tell exactly what you’re looking at. Their explanation is convenient and timely, though, as both government and private satellites have lately been crash more often than most people realize.

China’s Tiangong-1 Space Station, the 8.5 metric ton non-operational space station that first began operation in 2011, is set to crash back onto Earth sometime this year. And that’s just the tip of the problem. A 2013 study conducted by The European Space Agency found that there were more than 170 million pieces of debris larger than 1 mm floating around in space. Of that number, 670,000 pieces were larger than 1 cmn, and 29,000 were larger than 10 cm.

“Any of these objects can cause harm to an operational spacecraft,” the ESA said in their report.

Of course, fireballs in the sky are a trend, too. This month, a fireball meteor shocked Detroit, and even caused homes to shake, and on New Year’s Eve, a green fireball meteor wowed the UK. Last year also saw mysterious fireballs light up the skies of both New England and Florida. NASA confirmed the latter sighting, saying it was just a piece of an asteroid that had broken apart over the Gulf of Mexico.