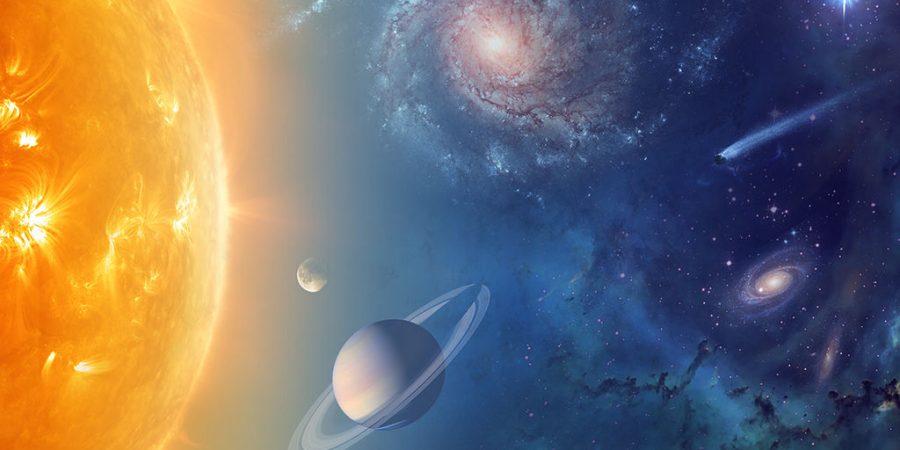 Our “Goldilocks” series shows that human life is impossible elsewhere in the universe, but it’s only addressing the impossibility of HUMAN life on other planets – not the myriads of other entities, such as good and bad angels and unclean spirits – all of which are superior to humans and are often called “Aliens”.

The following is a video with Dr. Hugh Ross, whose work we’ve used most in the Goldilocks series, explaining aliens:
https://youtu.be/Yku3KDzhX3Ihttp://truthrevolution.tv/audioarchives/aliens-and-our-universe/

Ancient writings speak of a dimension called the “Aer,” which is a dark and dismal part of this world system where evil spirits dwell. It overlays earth and is the dimension which the “Fowls,” aka evil spirits, inhabit. We refer to this as the second dimension or 2nd heaven where “unclean” spirits dwell. This would include the starry heavens of the visible universe, ruled over by the “Prince of the power of the air”.

Cf. Luke 8:5-12, “A sower went out to sow his seed: and as he sowed, some fell by the way side; and it was trodden down, and the fowls of the air devoured it… (11) Now the parable is this: The seed is the word of God. (12) Those by the way side are they that hear; then cometh the devil, and taketh away the word out of their hearts, lest they should believe and be saved.”

However, good angels dwell with evil, rebel angels in the 3rd heaven, where the visible Throne of God is, although the “Invisible” Throne of God is in the 4th Dimension where no creature is permitted.

All of this begs the question: Who are the Nephilim?

Genesis 6:1-4, “And it came to pass, when men began to multiply on the face of the earth, and daughters were born unto them, (2) That the sons of God saw the daughters of men that they were fair; and they took them wives of all which they chose. (3) And the LORD said, My spirit shall not always strive with man, for that he also is flesh: yet his days shall be an hundred and twenty years. (4) There were giants in the earth in those days; and also after that, when the sons of God came in unto the daughters of men, and they bare children to them, the same became mighty men which were of old, men of renown.”

The “Sons of God” in Genesis 6:2 refers to God’s angels as in the following: Job 2:1, “Again there was a day when the sons of God came to present themselves before the LORD, and Satan came also among them to present himself before the LORD.” Note: we assume normal men, whom some say are sons of God, aren’t included in this company who regularly appear before God, as this Scripture indicates, but angels certainly would be.

Jude 1:6 “And the angels which kept not their first estate, but left their own habitation, he hath reserved in everlasting chains under darkness unto the judgment of the great day.”

Apparently, such horrific judgment stopped other angels from following suit for thousands of years, but in the end time, when the rebellious, “white-collar” angels are cast out of heaven, they will be cast out of the 3rd heaven and realize that their final end is near, will marry the daughters of men again as follows:

Consider Daniel’s interpretation of Nebuchadnezzar’s prophetic dream of the end time as follows:

Daniel 2:42-45, “And as the toes of the feet were part of iron, and part of clay, so the kingdom shall be partly strong, and partly broken. (43) And whereas thou sawest iron mixed with miry clay, they shall mingle themselves with the seed of men: but they shall not cleave one to another, even as iron is not mixed with clay. (44) And in the days of these kings shall the God of heaven set up a kingdom, which shall never be destroyed: and the kingdom shall not be left to other people, but it shall break in pieces and consume all these kingdoms, and it shall stand for ever.”

Cf. Revelation 12:7-12, “And there was war in heaven: Michael and his angels fought against the dragon; and the dragon fought and his angels… (9) And the great dragon was cast out, that old serpent, called the Devil, and Satan, which deceiveth the whole world: he was cast out into the earth, and his angels were cast out with him… (12) … Woe to the inhabiters of the earth and of the sea! for the devil is come down unto you, having great wrath, because he knoweth that he hath but a short time.” Note: rebel angels also recognize they have a short time, so they have one last fling.

Some notable clergymen have stated their belief that rebel angels have an iron-based metabolism, whereas humans have a clay-based metabolism. Whether or not that’s true, we at least know that iron is stronger than clay and angels, even bad ones, are superior to men.

Therefore, does life exist on other planets? YES! There’s no doubt good and bad angels, along with aliens [aka evil entities from the dark world] exist, and they indeed have intellect and other powers beyond human. The Bible calls some of them “Nephilim.” These are “sons of God” aka “angels” who left their first estate in the Command Realm of the created heaven and married women on earth to produce giants.

Note: the root for the Hebrew word “Nephilim” is “Fallen ones,” and some say it refers to the fallen angels and others say it refers to their offspring. Either way, they’re fallen and evil. It’s noteworthy that there hasn’t been an account of a “friendly” or “pleasant” experience with so-called aliens but rather the opposite – fear, discomfort and/or anxiety – and sometimes injury. I chatted online with people who claim to have encountered aliens and said they had a bad odor and acted like bugs.

Job 38:7, “When the morning stars sang together, and all the sons of God shouted for joy?” Note: this is a description of events at the foundation of the earth – after angels were created, but before man was created.

The “Greys,” “Annunaki,” and others are said to exist, but some people say there are many more.

As for being too strong for men of earth to defeat one-on-one, consider the following Holy Scripture where David’s men killed giants – one on one:
2 Samuel 21:15-22 “Moreover the Philistines had yet war again with Israel; and David went down, and his servants with him, and fought against the Philistines: and David waxed faint. (16) And Ishbibenob, which was of the sons of the giant, the weight of whose spear weighed three hundred shekels of brass in weight, he being girded with a new sword, thought to have slain David. (17) But Abishai the son of Zeruiah succoured [secured] him, and smote the Philistine, and killed him. Then the men of David sware unto him, saying, Thou shalt go no more out with us to battle, that thou quench not the light of Israel. (18) And it came to pass after this, that there was again a battle with the Philistines at Gob: then Sibbechai the Hushathite slew Saph, which was of the sons of the giant. (19) And there was again a battle in Gob with the Philistines, where Elhanan the son of Jaareoregim, a Bethlehemite, slew the brother of Goliath the Gittite, the staff of whose spear was like a weaver’s beam. (20) And there was yet a battle in Gath, where was a man of great stature, that had on every hand six fingers, and on every foot six toes, four and twenty in number; and he also was born to the giant. (21) And when he defied Israel, Jonathan the son of Shimea the brother of David slew him. (22) These four were born to the giant in Gath, and fell by the hand of David, and by the hand of his servants.”

John Todd was a Grand Druid and member of the Council of Thirteen in the Illuminati before becoming a Christian. His sister, who also was a witch, sat on her porch and conjured up demons for a UFO night show on occasion and laughed about it as local residents tied up phone lines to the police station.

Again, the Goldilocks series offers proof that human life isn’t possible anywhere else except earth, but there definitely is “other” forms of life in existence – both here on earth and beyond.

Here are the previous articles in the series should you be interested in reading them: