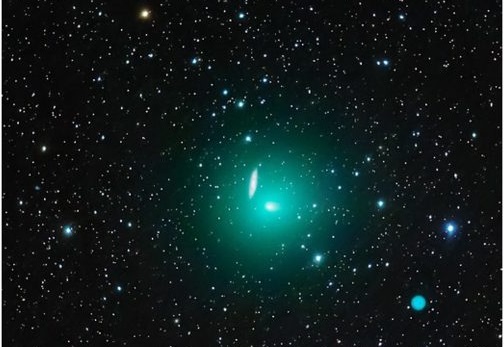 Green Comet to Flyby over North Pole on April 1st

Green comet 41P/Tuttle-Giacobini-Kresak is flying over Earth’s North Pole this week where sky watchers can find it all night long not far from the bowl of the Big Dipper. At closest approach on April 1st it will be just 21 million km from Earth–an easy target for backyard telescopes and almost visible to the naked eye. Amateur astronomer Yasushi Aoshima sends this picture of the approaching comet from Fukushima, Japan: 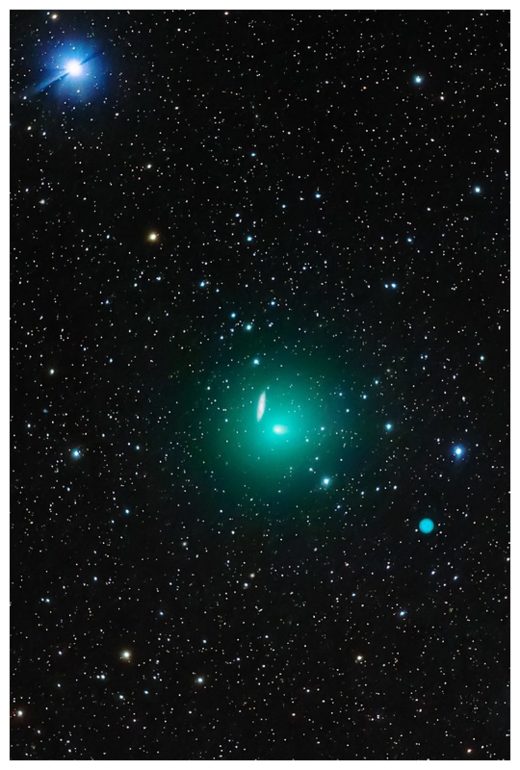 Why green? Like many comets, 41P has a verdant hue because its atmosphere contains diatomic carbon (C2)–a substance that glows green in the near vacuum of space.

Comet 41P is not only approaching Earth, but also the sun. April 12th is the date of perihelion (minimum distance from the sun). This means we are catching the comet just as solar heating is furiously searing its icy core. The green atmosphere should be well puffed up by streamers of vaporizing gas. Optimistic estimates of the comet’s brightness place it at magnitude +6, near the lower limit of naked-eye visibility.

This is not a Great Comet, but it should be a good one. The best time to observe is during the dark hours before sunrise when the green fuzzball is high in the northern sky. If you have a GOTO telescope, you can point it using an ephemeris from the Minor Planet Center. These sky maps show approximately where to look: March 31, April 1, 2.