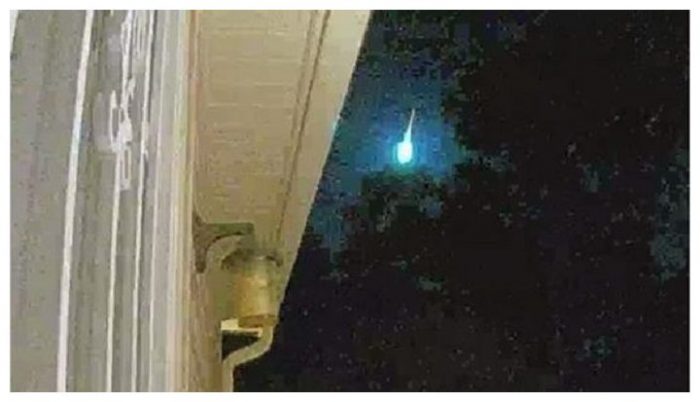 Was it a dragon? A sign of the apocalypse? A warning shot from North Korea?

No, that bright, green fireball seen streaking over Montgomery early Tuesday morning was just your average piece of celestial space rock burning up in the atmosphere, according to Bill Cooke with the NASA Meteor Environment Office.

Cooke said the fireball was a fragment of a comet measuring about 5 to 6 inches in diameter. Igniting as it hurtled into the atmosphere about 54 miles above Highway 84 in Conecuh County, the fireball flew well over the speed limit at approximately 83,000 mph.

It was spotted by three NASA cameras located in Georgia and North Carolina at approximately 3 a.m., but perhaps the best footage was captured by one Montgomery resident’s doorbell camera. Posted on Facebook Tuesday morning and shared with the Montgomery Advertiser, the video shows the comet briefly and brilliantly blazing by Alabama’s capital, obviously late for something.

Comets, sometimes called “dirty snowballs,” according to NASA’s website, are frozen balls of ice and dust which orbit the sun and are known for their long, gaseous tails. Their orbiting nature is why the same comet, Halley’s Comet for instance, can be seen in regular intervals (although Halley’s Comet can only be seen approximately every 75 years). Although the shard that lit up the sky Tuesday was relatively small, some comets can be as a large as a small town, according to NASA.

Cooke said the comet fragment eventually burned up about 33 miles in the air. Fireballs often appear green due to the color emitted when oxygen atoms are “excited” by a speeding space rock, Cooke said.

This is the second fireball sighting in Montgomery in two years. The other was exactly 20 months ago on Dec. 18, 2015, when a meteor from the asteroid belt between Mars and Jupiter entered the atmosphere, landing somewhere in the woods of Henry County, Georgia.