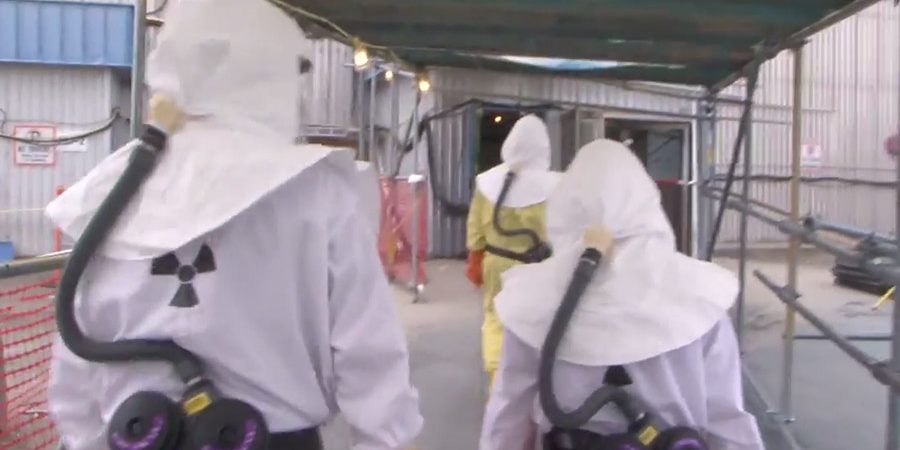 Several of the workers tasked with one of the largest nuclear cleanup efforts in the world have tested positive for radiation contamination. Out of the fraction of workers tested, 20 percent were found with “internal exposures.”

On June 8, more than 300 workers at the Hanford Plutonium Finishing Plant (PFP), which produced two-thirds of the nation’s plutonium “buttons” during the Cold War, were ordered to “take cover” after Continuous Air Monitoring (CAM) alarms at the facility detected airborne radiation, according to a press release

Veteran Hanford worker says they knew event like this would happen because CH2M Hill "rushing the demolition." & "not listening to workers"

The incident was not unexpected. One worker at the nuclear weapons facility told KING reporter Susannah Frame that CH2M Hill, an engineering consultant company contracted by the US Department of Energy, was “rushing the demolition” and “not listening to workers.”

Hanford officials said the order to take cover was merely a “precautionary” safety measure. Officials with CH2M Hill said the contamination was “not considered harmful.”

On Thursday, KING published an internal CH2M Hill email from July 21 that said the company issued bioassay kits, which detects the amount of radiation in the body, to more than 300 employees who were at the Hanford Plutonium Finishing Plant when the CAM alarms went off in June.

In the email, Todd Southerland, director of safety, health and radiological control at CH2M Hill, said the company has only received the results from 65 kits that were immediately available after the CAM alarms went off. From the 65 kits, the company said a “small number of employees” showed positive results for “internal exposures.”

Sources told KING that the “small number of employees” is 12, which would mean that 20 percent of the workers that have been tested have received positive results for radiation contamination.

Several workers told KING they were shocked by the number of employees that were contaminated internally as the result of a single event.

“In 36 years I’ve not seen this many people with internal exposure,” an anonymous Hanford worker told KING. “It’s a monstrous deal. And the workers know it, but they don’t want to say anything. They’re afraid.”

In the internal email, Southerland downplayed the dose that workers received, saying it was “less than or equal to 1 millirem.”

However, there is “no safe amount of plutonium you can inhale or ingest,” Doctor Marco Kaltofen of the Nuclear Science and Engineering Program, Department of Physics, at Worcester Polytechnic Institute told KING.

“If you fly from Seattle to DC, you’re in the air for 6 hours and you’re done. With plutonium, the exposure is in your body for days, months or even years. A millionth of a gram of plutonium has a measurable risk of causing a lethal lung cancer,” said Kaltofen.

Destry Henderson, a communication specialist at CH2M HILL Plateau Remediation Company, told KING that more positive results are expected to come out of the remaining tests.

He added that the company has taken steps to prevent future contamination by “adding additional dust suppression capability; implementing negative ventilation on the canyon during demolition; and reducing the proximity of nearby employees to the canyon.”

Many employees believe that proper precautions were not taken because the company is under pressure to meet their deadlines. The cleanup of the entire Hanford facility is expected to be completed by 2060, but CH2M Hill is under a contract to finish the demolition of the PFP by September.

On Thursday Jacobs Engineering Group announced they reached an agreement to purchase CH2M Hill, including the Hanford contract.

The agreement comes as the Department of Energy plans to rebid the three largest cleanup contracts for the Hanford nuclear reservation, including the one held by CH2M Hill and another held by Mission Support Alliance, a company owned by Jacobs Engineering Group, according to the Tri-City Herald.