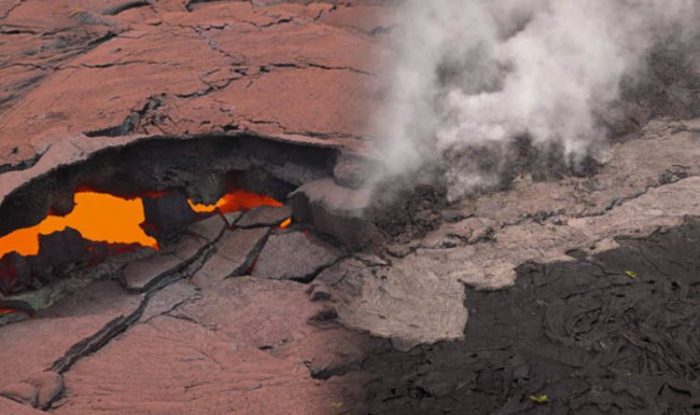 Do you recall an article we shared in April called ‘Unexplained Trumpet Sounds’ in the Skies of Hawaii‘. Now I have to wonder if it was perhaps a prelude to the serious events taking place in Hawaii presently.

Also maybe you recall another article we shared, ‘Increase in Large Earthquakes Expected Globally in 2018 as Earth’s Rotation Slows‘.. wonder if this is exactly what is starting up now.

Watch a few bonus videos of the 7.1 (updated to 6.9) quake from Friday in Hawaii at the end of the article, the last video in particular focuses on the actual earth events, really powerful stuff!

Hundreds of anxious residents on the Big Island of Hawaii hunkered down Saturday for what could be weeks or months of upheaval as the dangers from an erupting Kilauea volcano continued to grow.

Lava spurted from volcanic vents, toxic gas filled the air and strong earthquakes – including a magnitude 6.9 temblor on Friday – rocked an already jittery population. The trifecta of natural threats forced the evacuation of more than 1,700 people from communities near the lava and prompted the closure of parks, college campuses and a section of the main road through the area on the Big Island’s southern tip.

Five structures have burned and thousands of customers briefly lost power from one of the larger quakes.

Tesha “Mirah” Montoya, 45, said toxic fumes escaping from the lava vents weren’t enough to make her family evacuate, but the tipping point were the earthquakes.

“I felt like the whole side of our hill was going to explode,” she said. “The earthquake was what made us start running and start throwing guinea pigs and bunnies in the car.” 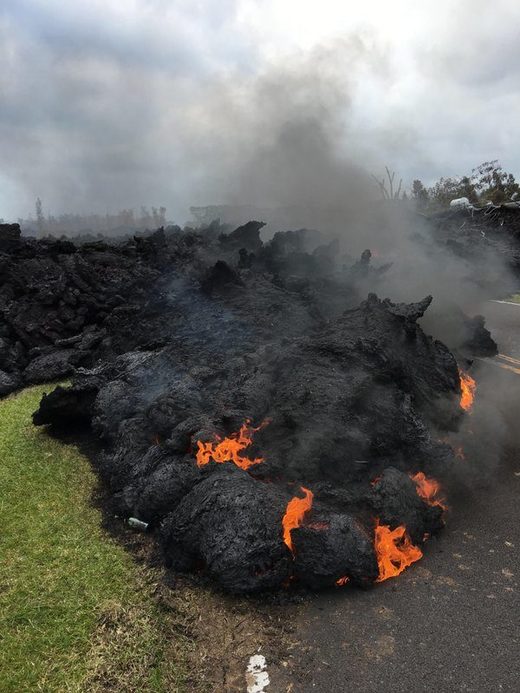 © AP Photo/Marco Garcia
Lava burns across the road in the Leilani Estates in Pahoa, Hawaii, Saturday, May 5, 2018. Hundreds of anxious residents on the Big Island of Hawaii hunkered down Saturday for what could be weeks or months of upheaval as the dangers from an erupting Kilauea volcano continued to grow.

Montoya, her husband and daughter don’t know how long they will be away from the three-story octagonal house they built nearly 20 years ago from a patch of “raw jungle.”

Geologists say Hawaii’s Kilauea volcano is likely to release more lava through more vents as it continues to erupt in a residential neighborhood on the Big Island.

“My heart and soul’s there,” she said in a phone interview from a cabin on the north side of the Big Island, where the family had hunkered down. “I’m nothing without the land. It’s part of my being.” 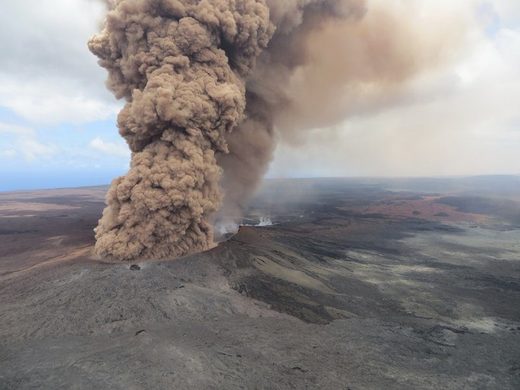 © U.S. Geological Survey via AP
This Friday, May 4, 2018, aerial image released by the U.S. Geological Survey, at 12:46 p.m. HST, a column of robust, reddish-brown ash plume occurred after a magnitude 6.9 South Flank of Kīlauea earthquake shook the Big Island of Hawaii, Hawaii. The Kilauea volcano sent more lava into Hawaii communities Friday, a day after forcing more than 1,500 people to flee from their mountainside homes, and authorities detected high levels of sulfur gas that could threaten the elderly and people with breathing problems.?

Tina Neal, the scientist in charge of the U.S. Geological Survey’s Hawaiian Volcano Observatory, warned distressed residents at a community meeting late Friday that eruptions could last longer than the ones from earlier this week, and earthquakes and aftershocks could continue for days, even weeks.

Gary McMillan said his home is about 3,000 feet (914 meters) from one of the fissures that is spewing lava and gas into Leilani Estates. He has remote cameras set up in his home and says that as of now his home is still intact.

He’s living out of his van with his wife at the nearby community center and constantly thinks about the things they were forced to leave behind – but understands why authorities are keeping residents out.

“I was a critical care nurse for 37 years, so I understand the health implications and the dangers involved,” McMillan said.

The lava lake at Kilauea’s summit crater dropped significantly, suggesting the magma was moving eastward toward Puna, a mostly rural district of forests, papaya farms and lava fields left by past eruptions.

Officials warned of the dangers of spattering hot rock and high levels of sulfuric gas that could threaten the elderly and people with breathing problems.

By Saturday afternoon, eight vents that had spurting lava into the air in Leilani Estates quieted down and were releasing only steam and gas. But scientists warned more vents would likely form and disgorge more lava.

Hawaii Volcanoes National Park evacuated all visitors and non-emergency staff. The quakes triggered rock slides on park trails and crater walls. Narrow fissures appeared on the ground at a building overlooking the crater at Kilauea’s summit.

The University of Hawaii at Hilo and Hawaii Community College both closed campuses and a long stretch of Highway 130, one of the main arteries through Puna, was closed because of the threat of sulfuric gas.

Leilani Estates, where lava was pushing through cracks in the earth, has about 1,700 residents and 770 homes. A nearby neighborhood, Lanipuna Gardens, which has a few dozen people, also was evacuated.

Kilauea has been continuously erupting since 1983 and is one of five volcanoes that make up the Big Island. Activity picked up earlier this week, indicating a possible new lava outbreak.

The crater floor began to collapse Monday, triggering earthquakes and pushing the lava into new underground chambers. The collapse caused magma to push more than 10 miles (16 kilometers) downslope toward the populated southeast coastline.

Residents have faced lava threats before.

In 2014, lava burned a house and destroyed a cemetery near the town of Pahoa. Residents were worried it would cover the town’s main road and cut off the community from the rest of the island, but the molten rock stalled.

From 1990 through 1991, lava slowly overtook the town of Kalapana, burning homes and covering roads and gardens.

Kilauea hasn’t been the kind of volcano that shoots lava from its summit into the sky, causing widespread destruction. It tends to ooze lava from fissures in its sides, which often gives residents at least a few hours’ warning before it reaches their property.

In the uncertainty, however, some residents found comfort in the abiding beauty of the Big Island. Evacuees Todd Corrigan and his wife awoke to a beautiful sunrise Saturday in Puna after spending the night in their car at the shore.