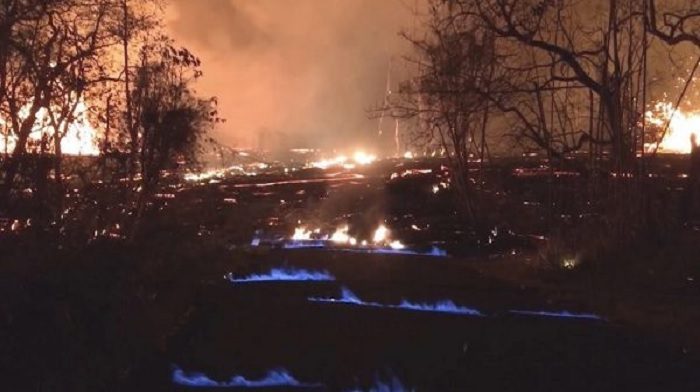 The Kīlauea volcano in Hawaii is behind a new, potentially deadly phenomenon – eerie blue fire streaming up from below the ground.

The flames, which can only be seen well at night, are caused by methane buildups, a by-product of the lava flows which have been enveloping the area around the volcano since it erupted last week on the Big Island.

Photos published on Wednesday by the US Geological Survey show the flames spouting from cracks in the pavement in the Leilani Estates neighbourhood, which has been worst affected by the surges of lava.

The methane gas is produced when lava rolls over trees and other plant life, and burns it underground, giving off the gas.

It then flows beneath the surface before bursting up when it finds an outlet, such as cracks in the ground caused by the recent seismic activity.

The burning gas itself is hot, but not dangerous beyond that.

However, authorities warned that if there is an underground build-up of the gas which is suddenly ignited, it can cause a powerful explosion, and toss chunks of rock several feet away, potentially injuring anybody it hits.

Although the Kīlauea eruption did not itself cause any injuries, and mainly produced volcanic gas, its after-effects have been dangerous.

One man had part of his left leg shattered after a piece of cooling lava hit him out of nowhere while he was on his balcony.

Officials have also warned residents tobeware of “laze”, or lava haze, a toxic gas containing tiny shards of glass which is produced when lava flows collide with the sea.