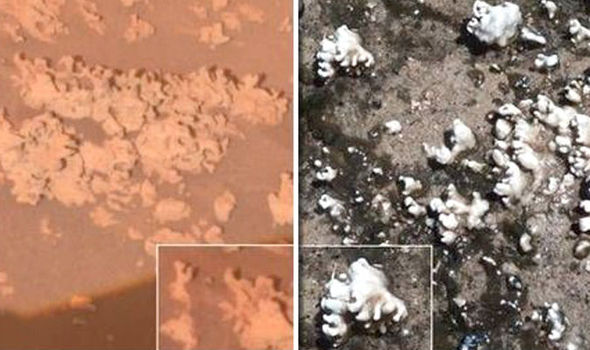 NASA’S rover based on the Red Planet could have found the first solid proof that Mars once housed alien life, it has been revealed.

Scientists have reviewed images taken by the Spirit rover nearly a decade ago, and have concluded that NASA may have previously overlooked evidence contained in them that could point towards them being biosignatures for past early forms of life in outer space on the planet.

A new study published in Nature Communications suggests rocky outcrops and regoliths formed of opaline silica that the rover photographed in the Gusev crater in 2007 potentially have these biosignatures, which are natural traces of current or past life.

Experts Steven Ruff and Jack Farmer, of Arizona State University (ASU), looked at data from the rover’s visit to Home Plate, a plateau of layered rocks in the Columbia Hills area of the crater.

It is an ancient area of eroded volcanic ash, thought to still contain an active hot spring, which has formed silica outcrops, including finger-like formations photographed by the rover.

Fossils here on Earth are one example of a biosignature of past life.

They also occur in less obvious forms, including organic molecules which are left trapped in rocks and compacted mats of microbes known as stromatolites – which are the earliest forms of life here on Earth, and are found in Western Australia, and El Tatio in Chile.

SPOT THE DIFFERENCE: Silica deposits on Mars, inset, compared to on Earth.

Stromatolites form when microbes gather into colonies in moist environments, before trapping sediment on the sticky surface.

Sediments react with calcium carbonate in the water, making a buildup of limestone.

Silica deposits in the structures at El Tatio were found by the team to be almost identical to those found by the Spirit rover in the Gusev crater.

It has begged the question of whether the structures on Mars were formed by similar early forms of life like the Stromatolites.

The team write in their report: “Our results demonstrate that the more Mars-like conditions of El Tatio produce unique deposits, including biomediated silica structures, with characteristics that compare favourably with the Home Plate silica outcrops.

“The similarities raise the possibility that the Martian silica structures formed in a comparable manner.”

Last month a separate report by a different team of scientists concluded evidence for life on Mars may have been found as far back as 1976 – but the scientists who suggested it then were not believed.

The crafts landed 4,000 miles from each other on Mars in the 1970s, but both yielded similarly shocking results following an analysis of Martian soil.

Once the soil had been returned to Earth, they underwent a series of tests including heating them, nutrient injection and being stored in the dark for two months. 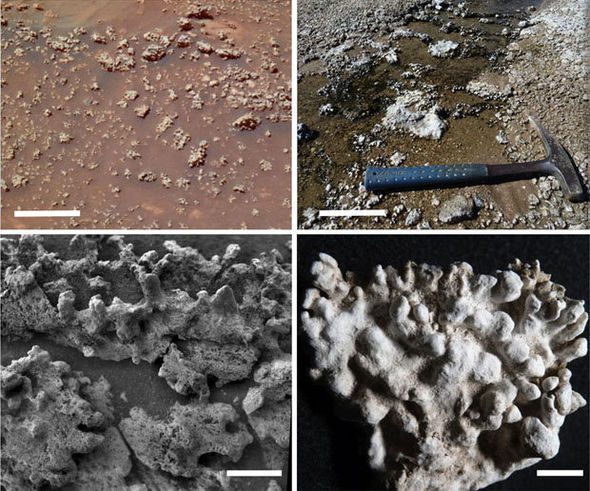 PROOF OF LIFE? The silica deposits on Mars, left, are remarkably similar to on Earth, right.

Scientists noted that the samples showed signs of microbial life – and were uncannily similar to the same tests on soils from California, Alaska, and Antarctica.

But other scientists dismissed the theory at the time, saying the samples were non-biological.

They said the results were “most likely caused by a non-biological soil oxidant.”

However, Dr Gilbert V. Levin, from the University of Arizona, and Dr Patricia Ann Straat, from the National Institute of Health, now claim this was in fact proof of life on Mars.

The duo wrote in a study published in Astrobiology: “Each of these characteristics is reminiscent of responses by a compendium of terrestrial microorganism species, including the initial positive responses, the 160C and 50C heat controls, the reabsorption of evolved gas upon second injection of nutrient, and death from isolated long-term storage.”

They added the results were “consistent with a biological explanation”.