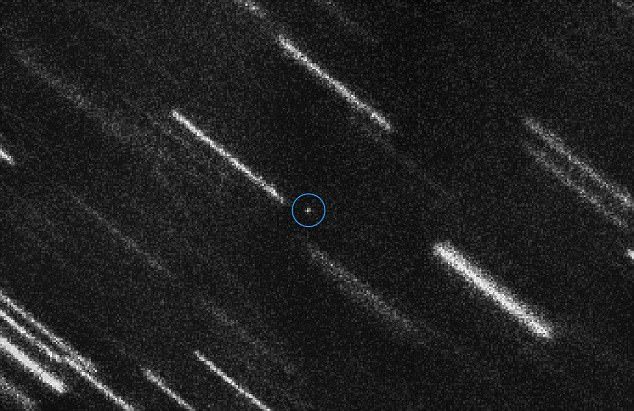 House Sized Asteroid Will Make ‘Damn Close’ Pass of Earth Next Week, Will be Only 27,000 Miles Away

An asteroid estimated to be up to 100 feet wide is set for a close shave with Earth next week, when it will soar past at a distance of just 27,000 miles above the surface – or, as some scientists have put it, ‘damn close.’

It first flitted past our planet in October 2012 at about double the distance of its next expected pass, before disappearing.

But, after tracking it down last month, scientists now assure it will make a safe pass.

With this close approach, NASA will have the opportunity to test its network of observatories for its planetary defense system system, in the event an asteroid did actually hit Earth.

‘Scientists have always appreciated knowing when an asteroid will make a close approach to and safely pass the Earth because they can make preparations to collect data to characterize and learn as much as possible about it,’ said Dr Michael Kelley, a scientist working on the NASA TC4 observation campaign.

‘This time we are adding in another layer of effort, using this asteroid flyby to test the worldwide asteroid detection and tracking network, assessing our capability to work together in response to finding a potential real asteroid threat.’

Scientists expected the asteroid to return for a near-Earth rendezvous this year, but did not know just how close it would come.

The latest observations, made on July 27, 31, and then again on August 5, revealed 2012 TC4 will pass within one eighth of the moon’s distance from the planet.

That is far enough out to just miss our geostationary satellites, according to their calculations.

‘As close as it is right now, I think this prediction is pretty safe, meaning that it will miss.’

The asteroid was still very far from Earth, about 35 million miles (56 million km) at the time of the observations.

Although still certain that it will not hit the planet, Nasa scientists previously calculated that 2012 TC4 could pass as close as 4,200 miles (6,800 km).

If the asteroid did hit Earth, it could lead to a much more devastating level of impact than the 18 metre (59 foot) asteroid that hit the city of Chelyabinsk in Russia in 2013.

But Detleft Koschny, of the European Space Agency, said: ‘We know for sure there is no possibility for this object to hit the earth.’

According to Nasa’s Jet Propulsion Laboratory, the asteroid’s next ‘close-approach’ to Earth will take place on December 29, 2019 – although at a much further distance of more than 21 million miles (34 million km). 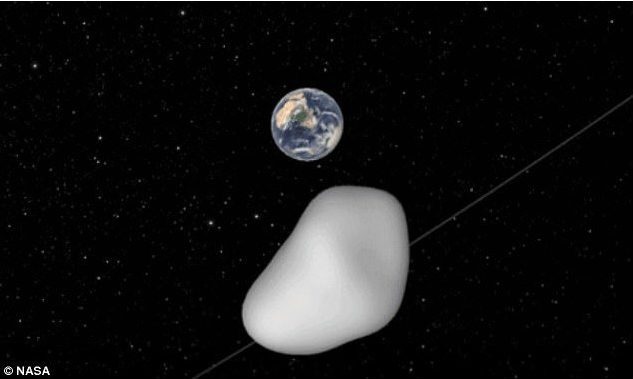 Nasa scientists previously calculated that 2012 TC4 could pass as close as 4,200 miles (6,800 km). The agency is using the opportunity to test its ‘planetary defense system’

If it were to make impact with Earth’s atmosphere, scientists predict the space rock would burn up before hitting the surface.

But, this could still cause damage and injuries at the ground level.

‘It is something to keep an eye on,’ Dr Judit Györgyey-Ries, an astronomer at the University of Texas’ McDonald Observatory, told Astrowatch.

‘We could see an airburst maybe broken windows, depending on where it hits.’

Researchers however, are still uncertain of the asteroid’s composition, which makes it difficult to predict what the effects of an impact on Earth would be.

A spokesperson for Nasa’s Jet Propulsion Laboratory told the DailyMail.com: ‘2012 TC4 was observed only briefly when it was discovered before it was too faint to see.

‘The ongoing observation campaign and the data we collect during this flyby will provide more direct information on mineralogical composition, structure, size.

‘Physical properties of an asteroid (composition, structure, size) and its velocity relative to the Earth will influence the effects on an impact.

‘That is one of the reasons we perform follow-up observations – to determine those physical properties.’

NASA hopes to use its international network of observatories to recover, track and characterize 2012 TC4.

‘This is the perfect target for such an exercise because while we know the orbit of 2012 TC4 well enough to be absolutely certain it will not impact Earth, we haven’t established its exact path just yet,’ said Paul Chodas, a manager working on the project.

‘It will be incumbent upon the observatories to get a fix on the asteroid as it approaches, and work together to obtain follow-up observations than make more refined asteroid orbit determinations possible.’