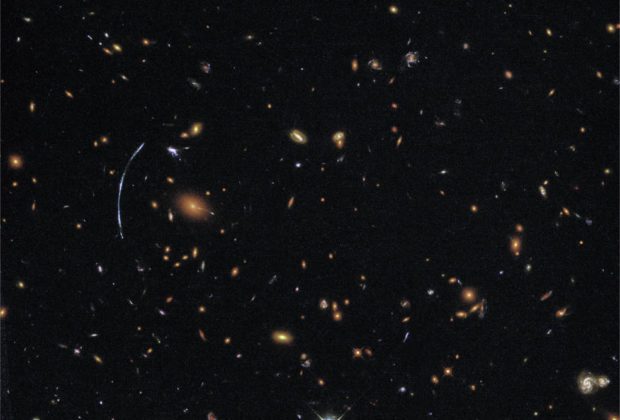 A natural magnifying glass has sharpened images captured by NASA’s Hubble Space Telescope, revealing a distant galaxy that contradicts existing theories about early star formation. By pairing Hubble with a massive galaxy cluster, scientists captured images 10 times sharper than the space telescope could snap on its own. 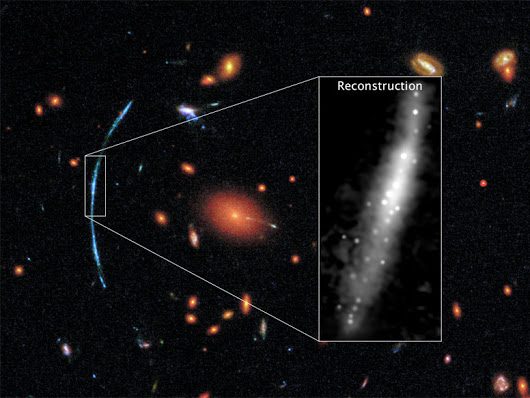 In this Hubble photograph of a distant galaxy cluster, a spotty blue arc stands out against a background of red galaxies. The arc consists of three separate images of a galaxy in the background called SGAS J111020.0+645950.8, which has been magnified and distorted through a process known as gravitational lensing.
Credit: T. Johnson/NASA/ESA

Though Hubble was built to peer into the early universe, even the legendary space telescope can sometimes use a boost. In this case, astronomers paired the instrument with a gravitational lens, a massive structure in space that bends and distorts light to allow glimpses at greater distances.

Gravitational lenses can be any type of object, ranging from a single massive galaxy to an entire cluster. As light from the more distant galaxy passes the massive object, it is bent and distorted into an arc. For the newfound cluster, this magnified the object almost 30 times. Scientists had to develop a special computer code to remove the distortions and reveal the galaxy as it would normally appear. 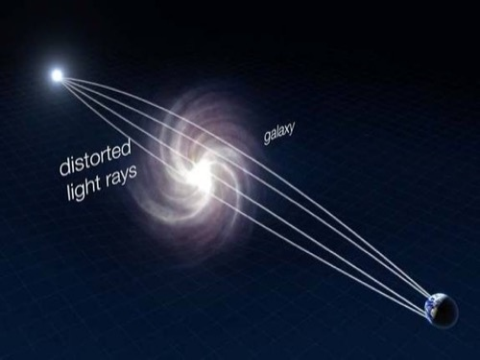 Gravitational lenses occur when the light from a more distant galaxy or quasar is warped by the gravity of a nearer object in the line of sight from Earth, as shown in this diagram.
Credit: ESA/Hubble, NASA

Without the boost of the gravitational lens, the disk galaxy would appear smooth and unremarkable through the Hubble telescope, Johnson said. With it, however, scientists could catch an amazing glimpse of the early universe.

“When we saw the reconstructed image, we said, ‘Wow, it looks like fireworks are going off everywhere,'” said Jane Rigby, an astronomer at NASA’s Goddard Space Flight Center in Greenbelt, Maryland, and lead author of the third paper.

Whereas Hubble revealed newborn stars, NASA’s upcoming James Webb Space Telescope will reveal older, redder stars. Scheduled to launch in October 2018, Webb will also be able to peer through the dust around the galaxy.

“With the Webb Telescope, we’ll be able to tell you what happened in this galaxy in the past, and what we missed with Hubble because of dust,” Rigby said.