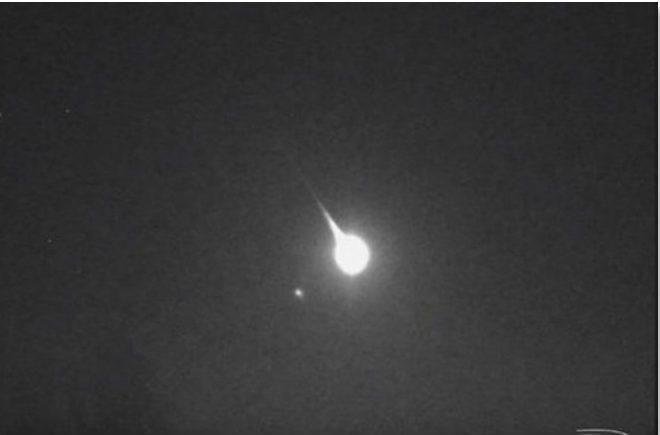 What people likely saw was a fireball, officials said — but one more properly called a meteor. Several Whatcom County residents saw it, too, but they recognized the blazing streak as a shooting star at 7:38 p.m. Tuesday.

“It was green, very bright, and super fast heading north,” said Bridgett Bullard of Blaine. “I saw it while I was getting onto I-5 northbound at Bakerview. My sister saw it and she was on Grandview in Birch Bay.”

Others were convinced they had seen an aircraft hit the water. Fire crews and other units were sent to investigate, including the fireboat Salish Star.

“Report of a plane seen going down in the area, Kwina Road and Haxton, in the water,” a dispatcher said, according to emergency radio traffic archived online.

Air traffic control officials at Bellingham International Airport said they were not aware of any trouble with an aircraft and the FAA advised searchers the callers likely saw a meteor, said Bill Hewett, assistant chief of the Bellingham Fire Department.

“The tower said there were no missing or overdue aircraft and the FAA also advised us that they had reports of a meteor flaming out as far south as Tacoma,” Hewett said.

But as the crew of a Coast Guard boat from Bellingham prepared to join the search, officials at Sector Puget Sound headquarters in Seattle called to say it was meteor, said Petty Officer 2nd Class Matthew Nelson in Bellingham.

“There were a couple in the Puget Sound area that we received reports of,” Nelson said.

Jessica Hicks of Bellingham said she saw it on her way home from work.

“It appeared to go towards the northern part of the Semiahmoo area north of Birch Bay,” she said. “It was moving extremely fast, and had a bright green hue to it as it went below the tree line.”

Officials at the National Weather Service in Seattle said they had no reports of any large meteor lighting the sky overnight, but meteorologist Jay Albrecht noted that the Orionid meteor shower peaked the night of Oct. 21-22 and viewers probably saw lingering star trails from that event. The Orionids are an annual phenomenon caused by dust from the tail of Halley’s Comet, according to EarthSky.org.

It’s among the less prolific of annual meteor showers, producing 10-15 per hour. A time-lapse video of the Seattle night sky shows several streaks that could be meteors, but they also could be passing aircraft, Albrecht said.

It amazed Marilee Weber as she saw it while driving across the Skagit Valley.

“It had a tail like fireworks that did have a greenish hue but the head was a ball that was aflame in alternating blue and orange colors and it burnt out before it hit the ground. Quite a sight and hard to describe, “Weber said in reply to a Facebook post. “Of course it appeared to be coming down right in front of me, but I understand it has been sighted as far south as Tacoma, so who knows where it actually was.”

Susan Lignell saw it in Fairhaven “traveling very fast. I saw the colors red, yellow, orange and some white. It was a huge fireball.”