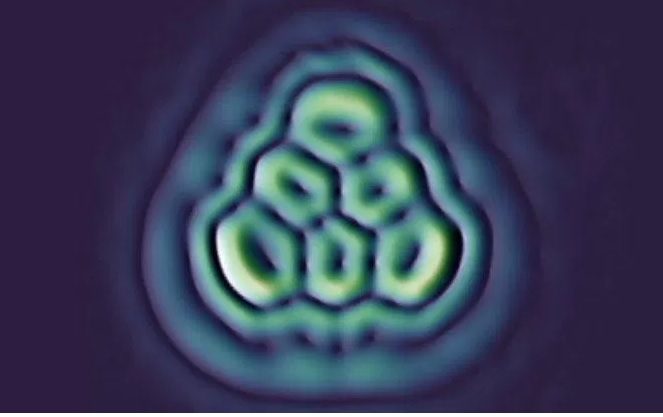 IBM Created an “Impossible” Molecule that Could Power Quantum Computers

Chemists hate being beaten by physicists at their own game. At IBM Research, physicist Leo Gross and his team have done just that.

Gross’s team made a triangular molecule that chemists have found impossible to produce by conventional chemistry. To rub it in even more, Gross and his colleagues may go even further by using these molecules to create long sought-after quantum computers.

The molecule in question is called triangulene. It looks like it was cut out from graphene, a single-atom layer of carbon with its atoms arranged in hexagons. But it’s more than that. The carbon atoms in each of the corners of triangulene’s structure are bonded to a hydrogen atom. Crucially, the two dots in the structure are free electrons, and that’s what has made the structure so difficult to construct. Electrons like being in pairs, so molecules with free electrons are highly reactive and thus unstable.

When chemists make molecules, they depend on chemical reactions—molecules are too small to manipulate directly. For instance, the width of a triangulene molecule is less than a millionth of the width of a human hair. But Gross’s team of physicists gained scientific fame in 2009 for building a machine that could image molecules at the atomic level.

Here’s how it works: First, the team deposits the molecule it wants to image on a copper surface coated with common salt, in a vacuum at very low temperatures. Then they introduce a very fine gold tip with a single molecule of carbon monoxide at its end. The gold tip is moved from side to side over the molecule, which is pushed back and forth by the repulsive forces of the molecules coming close to one another. The path the tip traces is read by a machine and then converted to an image.

Using this method, the IBM team has imaged iconic molecules like olympicene and even caught molecules in intermediate states of chemical reactions. What they get are grainy images, but for a chemist this brings textbooks to life. 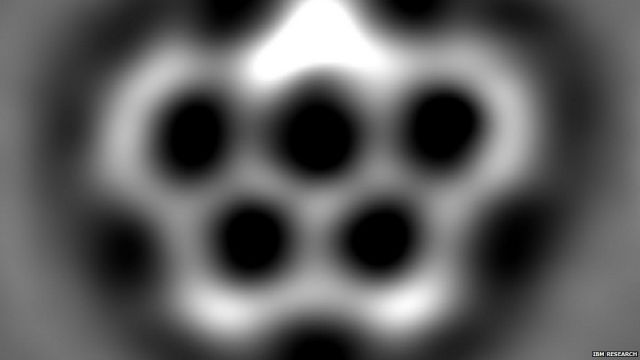 To create triangulene, IBM researchers acquired its precursor from chemists at the University of Warwick. This precursor had two extra hydrogen atoms where triangulene has free electrons. Like in their imaging studies, Gross and his team first deposited the precursor molecule on a copper surface. Using the carbon monoxide and gold tip, the team inspected the molecule. Then, with two precisely aimed voltage pulses down the tip, the team removed the two extra hydrogen atoms, leaving them with two free electrons and, voilà, triangulene. The molecule remained stable for as many as four days.

“Triangulene is the first molecule that we’ve made that chemists have tried hard, and failed, to make already,” Gross told Nature.

Gross can be proud of physics for getting one over on chemistry, but this exercise also may have practical implications. When the team tested the molecule’s magnetic properties, they confirmed that the two free electrons had the same spin. Apart from carrying a negative charge, electrons can spin in either clockwise or anti-clockwise direction—and these spins can be manipulated. This practice has given rise to an emerging field of “spintronics,” where like the sequence of 0s and 1s govern the behavior of electronics, information can also be stored in the spins of electrons.

Using molecules like this may have applications for quantum computers, where only a handful of quantum bits are needed to create a machine that’s many times more powerful than the best silicon chip-powered computers. Even though creating each triangulene molecule by hand is a time-consuming and expensive, it won’t take that many to make a major scientific breakthrough.