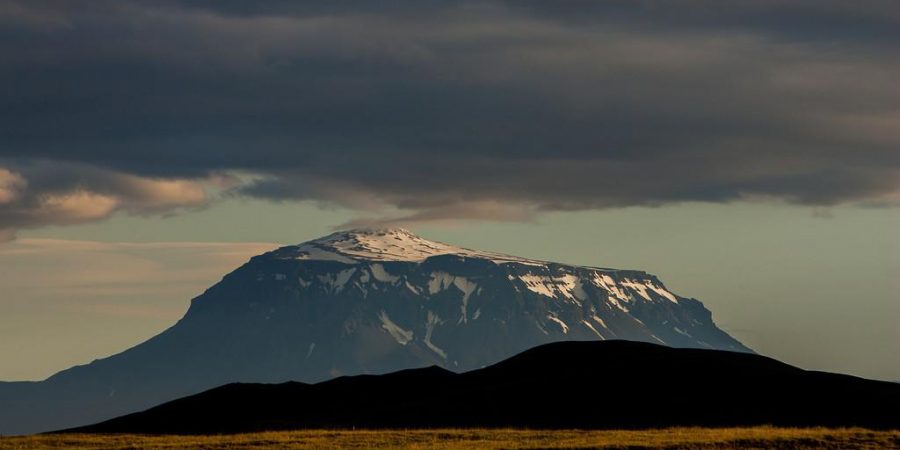 An eruption at Iceland’s biggest volcano could be brewing, an expert has warned.

The 6,590ft Bardarbunga volcano, which is hidden under the ice cap of the Vatnajökull glacier, has been rocked by a series of quakes in recent days.

Páll Einarsson, a geophysicist at the University of Iceland, says this shows that pressure in the volcanoes magma chamber is increasing.

He warns that the tremors mean Bardarbunga is ‘clearly preparing for its next eruption’ in the next few years which could create an ash cloud that will cause travel chaos.

The warning follows the 2010’s explosive eruption of Icelandic volcano Eyjafjallajökull, which threw thousands of tonnes of mineral ash into the air.

Most of this was fine particles that created an ash cloud.

This caused travel chaos causing more than 10 million air passengers to be stranded as a result of its ash cloud and cost the European economy an estimated £4 billion ($4.9 billion).

A similar scenario could take place if Bardarbunga were to erupt.

Bardarbunga is one of the most active of Iceland’s 130 volcanoes.

In 2014, a record-breaking volcanic eruption from Bardarbunga spewed lava and ash over Iceland’s Highlands for nearly six months, leaving behind the largest caldera formation ever observed.

This eruption was the strongest of its kind in Europe in more than 240 years, and released two cubic kilometres of volcanic material.

Now, the volcano is showing signs of restlessness once again after being rocked by four huge earthquakes last week.

This suggests that magma could be building up below the surface, which could lead to another eruption soon.

However, Dr Gunnar Guðmundsson from the Icelandic Met Office told MailOnline that ‘there are no signs it will erupt imminently’.

He said there were currently only some small earthquakes on the south part of the Vatnajoekull icecap.

‘Probably in the coming weeks there will be some more earthquakes. We cannot predict but it’s unlikely Bardarbunga will erupt as a result’, he said.

‘It’s not very likely that the current activity will lead to an eruption breaking the ice or erupting along the rift zone’, he said.

‘So, a lot more has to happen before the current seismic activity develops into a major eruption and the chance of it doing so is statistically quite small, of order 1 in 100’.

According to Oregon State University, most earthquakes directly beneath a volcano are caused by the movement of magma.

The magma places pressure on the rocks until it cracks the rock.

Magma then moves into the crack and begins building pressure again. Every time the rock cracks it makes a small earthquake.

Einarsson told the Daily Star the latest earthquakes were part of a series that has been ‘in progress for two years.’

‘The reason for the earthquakes in this place is that the volcano Bardarbunga is inflating, i.e. the pressure of magma in the magma chamber is increasing It has been doing this since the last eruption ended, in February 2015,’ he said.

‘The volcano is clearly preparing for its next eruption, that may happen in the next few years.’

‘The earthquakes last week are just the symptoms of this process, they do not cause the volcano to erupt.’

The Icelandic Met Office has listed activity levels at the volcano as ‘high’ but has not yet issued a warning.

But Bardarbunga isn’t the only volcano that’s worrying Einarsson.

In February, he warned that three other volcanoes, Katla, Hekla, Bardarbunga and Grímsvön, are priming to erupt, which could lead to travel chaos.

While all four volcanoes are closely monitored by geophysicists, it is very hard to predict which will erupt, exactly when and the extent of the eruption

Katla is the least recently-active volcano of the four, which last erupted in 1918.

But according to the Global Volcanism Program, Katla has been showing signs of restlessness recently, with tremors in September exceeding the magnitude three mark.

This level of tremor could be enough to send magma upwards through the crust, and cause it to burst through the surface.

Speaking to Iceland Review, Kristín Jónsdóttir, natural hazard program director at the Icelandic Met Office said: ‘It’s been a long time since Katla erupted, and this could just as well end with an eruption. It’s just impossible to tell right now.’

Another concern is melting under the ice cap of Mýrdalsjökull glacier, where Katla sits, which, if it occurred, would cause a glacial outburst flood.

Ms Jónsdóttir added, ‘This could just as well die down, and nothing would result. We simply can’t say at this stage.’

Despite the fears of Katla erupting, Ms Jónsdóttir added: ‘I think we’re all ready for her when she comes. This is well organized.’

In August Katla was moved from yellow back to green, meaning that volcanic activity has subsided and there is little sign of impending eruption.

Hekla, otherwise known as the ‘Gateway to Hell’, erupted in 2000, sending a cloud of ash up to six kilometres high.

Hekla, otherwise known as the ‘Gateway to Hell’ is located in the southern part of the country and has been quiet for sixteen years.

But data collected in June last year revealed it is building up magma, and its internal pressure is currently higher than before its last two previous eruptions.

The volcano has erupted approximately once every 10 years, from 1970 to 2000, but has remained dormant ever since.

Professor Einarsson told Icelandic news agency Visir, that people should stop visiting the volcano, which is a popular tourist destination, due to an increased risk of eruption.

‘We could be looking at a major disaster when the next eruption begins if we are not careful.’

‘Hekla is ready – at any moment,’ Professor Einarsson said.

‘There are also 20-30 planes full of passengers flying right over the top of Hekla every day,’ he warns.

Grimsvotn is very near Bardarbunga, and is likely to be fuelled by the same source of magma.

In 2011, Grimsvotn erupted, sending a huge plume of ash into the skies, that led to several flights being grounded.

Like its neighbour, Grimsvotn has seen seismic activity steadily rising, which suggests that it could erupt again in the near future.

While all four volcanoes are closely monitor by geophysicists, it is very hard to predict which will erupt, exactly when and the extent of the eruption.