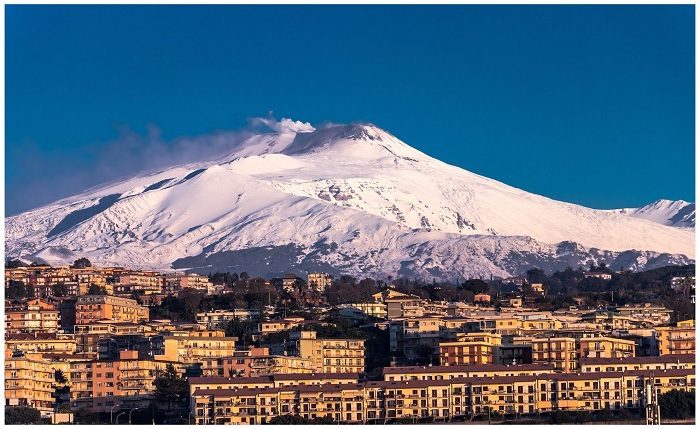 Mt Etna, one of the world’s most active and iconic volcanoes, is at high risk of suddenly collapsing into the sea, potentially triggering a devastating tsunami, new research suggests.

In a paper published in the journal Science Advances, a team led by Morelia Urlaub from the EOMAR Helmholtz Centre for Ocean Research Kiel, in Germany, presents findings that explain why the south-eastern flank of the volcano is sliding into the sea at a rate of three to five centimetres every year – a phenomenon first documented in the 1980s.

The cause, it turns out, is not increasing pressure from magma swelling up through Etna’s plumbing, but gravity.

The conclusion is vitally important in terms of assessing the risk posed by the volcano, which is sited between two densely populated cities, Messina and Catania. Movement caused by magma and movement caused by gravity, Urlaub and colleagues report, “have fundamentally different hazard implications”.

The difference is significant. With magma-based deformations, pressure is at its greatest in the heart of the volcano, decreasing as it progresses towards the outside. With gravitational change, the pressure is greatest on the flank itself as it is pulled into the sea – an effect that occurs independent of any magma-driven activity.

Until now, the researchers report, “the overall consensus for Etna has been that it is mainly the magnetic plumbing system that drives movement of the unstable south-eastern flank, rather than gravitational or tectonic forces”.

That assessment – and consequently a slew of public safety action protocols – are now likely to change.

To get their result the researchers positioned a network of five transponders equipped with pressure sensors on the sinking flank of Etna, about 1200 metres below sea level. The transponders were able to gather precise information regarding even the tiniest change in the volcano’s location by continuously sending signals back and forth between each other.

The system was able to detect any change in vertical or horizontal alignment at distances of less than a centimetre. The results clearly revealed that part of the flank is moving in relation to stable formations in either side.

Mt Etna is an extremely active volcano, erupting in various degrees of severity every couple of years. On December 3, 2015, it blasted into life, sending an ash plume seven kilometres into the air. In March 2017 a much smaller eruption injured 10 people – including members of a British television crew, who were filming near the summit.

The findings from Urlaub and colleagues, however, suggest strongly that exploding magma plumes and ash clouds are not the only – or even perhaps the main – danger posed by Sicily’s famous landmark.

“We cannot exclude flank movement to evolve into catastrophic collapse, implying that Etna’s flank movement poses a much greater hazard than previously thought,” they conclude.