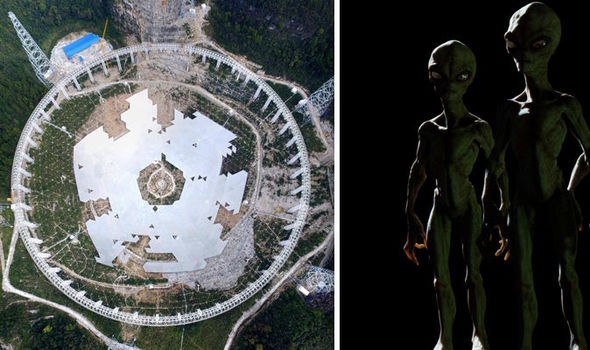 A HUGE mega-telescope, nearly twice the size of the world’s biggest so far, WILL find evidence of extra terrestrial life if it is out there, scientists have claimed.

Astronomers who will operate the £127million Fast (Five-hundred-metre Aperture Spherical Radio Telescope) said it would be able to pick up any messages from alien life forms and pick them out from the white noise of space.

The huge equipment, which has a 200 metres wider aperture than the current biggest telescope, the 300 metre-diameter Arecibo Observatory, in Puerto Rico, is expected to be finished by September. 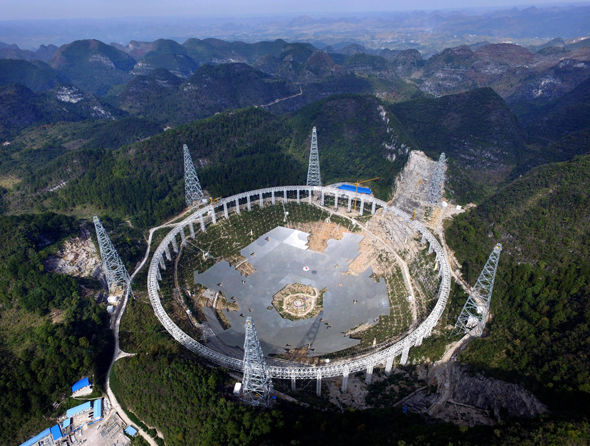 The vast telescope in its mountain backdrop

Nan Rendong, a senior scientist on the project, said: “A radio telescope is like a sensitive ear, listening to tell meaningful radio messages from white noise in the universe.

“It is like identifying the sound of cicadas in a thunderstorm.”

Work began on the project in the isolated Qiannan region of Guizhou province’s Karst mountains in 2011. 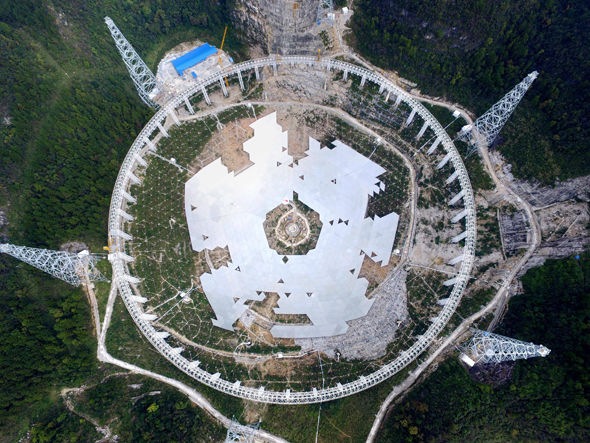 Chinese officials say it should be completed by September

The telescope will be made up of 4,450 triangular movable panels which will reflect radio signals from across the universe to a 30-tonne receptor, before they attempt to decipher them.

Wu Xiangping, director-general of the Chinese Astronomical Society, said Fast’s high sensitivity could search for intelligent life outside the galaxy and explore origins of the universe”.

Astronomer Shi Zhicheng said: “If intelligent aliens exist, the messages that they produced or left behind, if they are being transmitted through space, can be detected and received by Fast.”

But the price of progress comes at a cost to China’s general population.