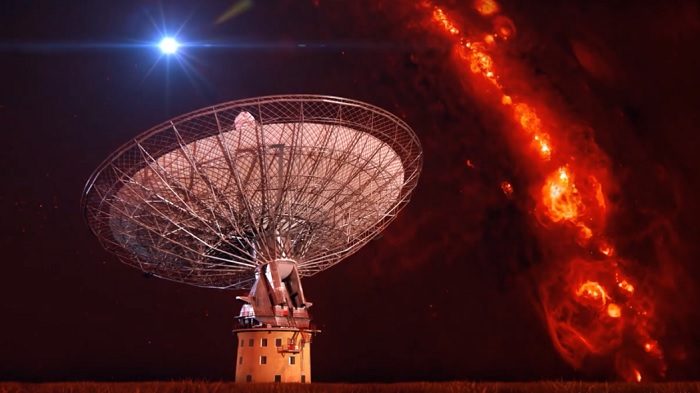 On November 16, 1974 SETI researchers at the Arecibo radio telescope in Arecibo, Puerto Rico, beamed a message into space. They fired it toward Messier 13, a globular cluster in the Hercules constellation, which rests 25,000 light years away.

The transmission produced an image and when decoded, the message provides the following information:

The atomic numbers of the elements that form deoxyribonucleic acid (DNA):

The formulas for the sugars and bases in the nucleotides of DNA:

The number of nucleotides in DNA, and the double helix structure:

A human figure, the physical dimensions of an average man, and the human population of Earth:

A representation of the Solar System:

A graphic of the Arecibo radio telescope and the dimensions of the transmitting antenna dish:

The signal was a million times stronger than the typical TV transmission.

On August 21, 2001 two crop circles popped up near the Chilbolton Observatory in Hampshire, UK. One resembled a human face but the other has since dubbed the “Arecibo Answer,” as it contains a format nearly identical to the original 1974 transmission, albeit with a few changes.

The response, when decoded, leaves us with several differences.

Most interstingly, however, is another message encoded within a crop circle (known as the Crabwood formation) that appeared in 2002, also in Hampshire, UK. This particular crop circle contains the image of an extraterrestrial along with a circle, or disc, containing yet another binary message. The message decoded using 8-bit binary ASCII code.