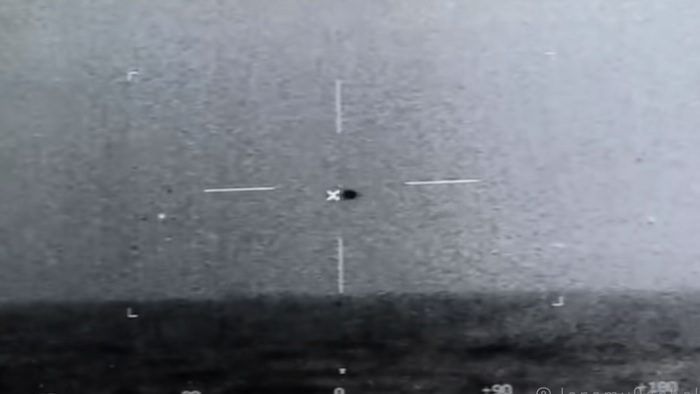 This footage was filmed in the CIC (Combat Information Center) of the USS Omaha on July 15th 2019 in a warning area off San Diego. This footage depicts a UAP event series that reached a crescendo with one of the unknown targets entering the water. No wreckage found. None of the unknown craft were recovered.

ADDITIONAL DETAILS
* Minimum 14 targets.
* Minimum 6ft in diameter – solid mass.
* Varying speeds from 40 kts – 138 kts (46 mph – 158 mph).
* Flight lasting longer than an hour.
* Unknowns were illuminated.
* Unable to discern origin, nor launch or landing points.
* Unknown vehicles picked up on more than two types of RADAR.
* Still images of this footage were included in the May 1st, 2020 UAPTF intelligence briefing that I have previously reported on.
* It is noted in intelligence reports that the “spherical” craft appeared to be transmedium capable, and were observed descending into the water without destruction.
* It is noted in intelligence reports that the “spherical” craft could not be found upon entry to the water – that a submarine was used in the search – and recovered nothing.
* This footage is unclassified.
* Craft remain officially – unidentified.

“In the end I’m 50/50 that it is man made tech from somewhere. Either way it’s world changing. Because of the incredible energy capacity of the crafts.” – Crewman, USS Omaha
﻿
SUMMARY
What’s presented here is genuine UFO / UAP footage – evidence – with impressive provenance. These are images and video shot by our US Military – during a variety of UAP encounters. Incursions – by seemingly Advanced Transmedium Vehicles of unknown origin – interacting and observing our Navy’s warships and fleet deployments in a restricted airspace. The Night Vision and FLIR technologies represented in this content, in this case, is tied into some of the most sophisticated weapon systems known to humankind. The evidence here must be differentiated from other UAP documentation – due to the context of capture alone. Collectively, this data drop represents a small section within a large mosaic of UAP awareness by our DoD. And its presence in a classified series of intelligence briefings – clearly demonstrates how the UAP subject is being viewed, pursued and handled by the United States defense industry.