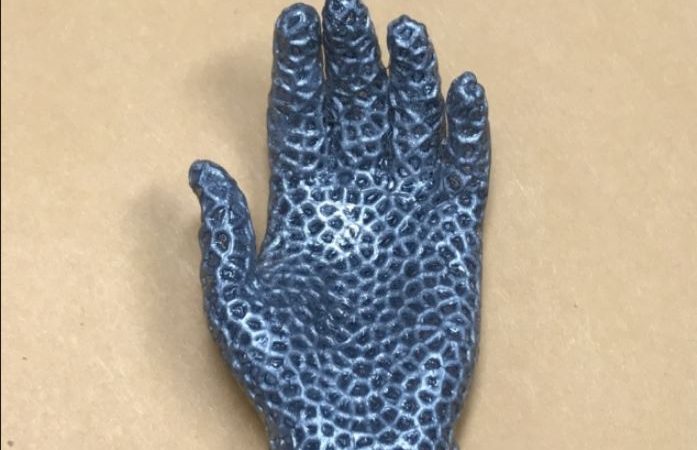 Incredible Material Could be Used to Make a Liquid Metal Robot

Maybe this could be the humble beginings of the T-1000 robots from the Terminator movies.

A liquid metal lattice that can be crushed but returns to its original shape on heating has been developed by Pu Zhang and colleagues at Binghamton University in the US. The material is held together by a silicone shell and could find myriad uses including soft robotics, foldable antennas and aerospace engineering. Indeed, the research could even lead to the creation of a liquid metal robot evoking the T-1000 character in the film Terminator 2.

The team created the liquid metal lattice using a special mixture of bismuth, indium and tin known as Field’s alloy. This alloy has the relatively unusual property of melting at just 62 °C, which means it can be liquefied with just hot water. Field’s alloy already has several applications – including as a liquid-metal coolant for advanced nuclear reactors.

Zhang and colleagues combined the alloy with a silicone shell through a complex hybrid manufacturing process that combines 3D printing, vacuum casting and so-called “conformal coating” – a technique normally used to coat circuit boards in a thin polymer layer to protect them against the environment. The silicone shell is what allows the lattice to “remember” a desired shape and restore such when the alloy is melted.

“Without the shell, it won’t work, because the liquid metal will flow away,” Zhang said. “The shell skeleton controls the overall shape and integrity, so the liquid metal itself can be confined in the channels.”

To illustrate the potential of the lattice technology, Zhang and colleagues made several demonstration structures – including honeycombs, the letters BUME (for Binghamton University mechanical engineering), a spider web-like mesh and a lattice in the shape of a human hand. When crushed and reheated, all eerily return to their original shape.

When solid, Field’s alloy is very strong and stable and is far stiffer than most shape-memory polymers, according to Zhang. A crucial benefit of the new material is that an object can easily be crushed down into a much smaller spaces for transport or storage before being restored to its usual shape. The researchers think this would make the material ideal for use in space missions, where it could be used to make antennas or building superstructures that could packed tightly on spacecraft ship and then expanded on arrival on the Moon or another planet.

The material could also be used to make cushions because it can absorb a considerable amount of energy when crushed. Zhang suggests that this could be useful for building reusable spacecraft. “Normally, engineers use aluminium or steel to produce cushion structures,” he says. “After you land on the Moon, the metal absorbs the energy and deforms. It’s over – you can use it only once.”

In contrast, a spacecraft with landing cushions built using a liquid metal lattice could be reused over and over again. “Using this Field’s alloy, you can crash into it like other metals, but then heat it up later to recover its shape,” Zhang said.

“There’s been growing interest in machines and structures that can change their shape, stiffness, and ability to bear load. These architectures have potential use in emerging applications like soft robots that mimic biological organisms, wearable computing systems that can conform to the body’s natural motion, or wearable robotics that can assist in human motor tasks,” says Carmel Majidi, a mechanical engineer from the Carnegie Mellon University. “[This work] nicely builds on past research in stiffness tuning and shape memory materials,” he says, adding it. “is an excellent demonstration of how low melting point metals can be used for creating smart and adaptive structures”.

Michael Dickey — a chemical engineer at North Carolina State University agrees, adding, “This work nicely takes advantage of the capabilities of 3D printing, the elastic energy of elastomers, and the enormous changes in modulus that occur when low melting point metal alloys melt”.

With their initial study complete, the researchers are now working to improve the durability, strength and energy absorption capacity of their liquid metal lattice materials – alongside scaling up and refining the manufacturing process for such.

Zhang also has another goal in mind. “Our dream is to build a liquid metal robot,” he said. “Now we have a hand, so we’re one step further.

The research is described in the journal Additive Manufacturing.