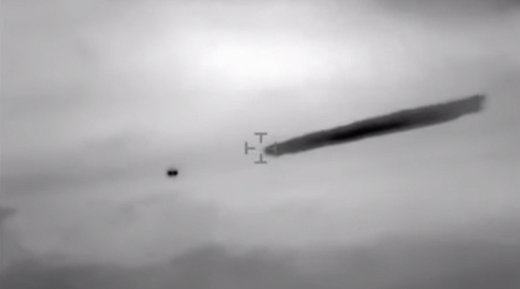 The report from an alleged UFO sighting by the Chilean military over two years ago has just been declassified and the internet is abuzz with speculation – this is one mystery that has experts completely stumped.

The Chilean government agency which investigates UFOs, the CEFAA, reports that a naval helicopter was carrying out a routine daylight coastal patrol in November 2014 when the camera operator noticed an unidentified flying object ahead.

It was flying horizontally and at a steady speed similar to that of the helicopter.

The crew contacted local airports and land-based military installations to confirm whether the object had appeared on their radar screens. It did not. They then attempted to contact the craft using standard civilian radio frequencies, but to no avail.

Twice during the 10-minute recording, the UFO ejects an unknown material into the air, which is only visible on the infrared (IR) spectrum. To the naked eye, the object itself is barely visible and the substance it expels disappears straight into the clouds.

Before the crew could obtain any more information, the UFO vanished into the clouds.

Each and every theory proposed so far for explaining the bizarre object has been debunked, officially making this a genuine unidentified flying object.

The footage was captured on a sophisticated Surveillance & Reconnaissance (SAR) camera in broad daylight. Nearby radar installations could detect the helicopter which captured the amazing footage but nothing else in the vicinity, which rules out low flying airplanes and weather balloons.

As part of the two-year investigation, multiple agencies were contacted to verify whether any satellites or falling space debris could explain away the phenomenon – they could not. The team assembled to study the footage and investigate the case include astrophysicists, video and image analysts, and aeronautic engineers, however they were unable to explain the object.

Here is the declassified footage in full:

Below is another video on the subject:
5 things About Chilean Navy helicopter UFO video #UFO