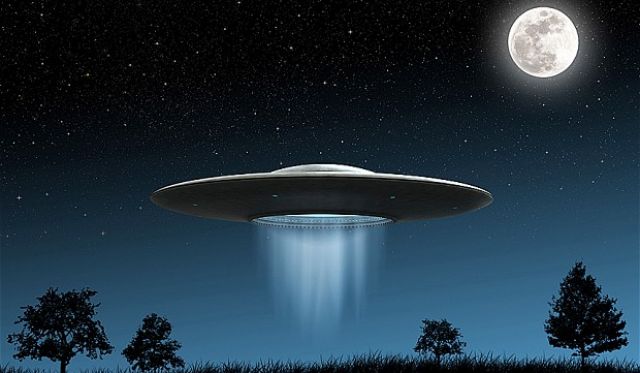 Did a group of walkers encounter something otherworldly in the woods ?

Numerous sightings of strange objects in the skies above County Derry have been reported over the years.

Ireland might not be the best known UFO hot spot, but like its neighbor the UK, the Emerald Isle has seen more than its fair share of close encounters over the last few decades.

report from Magherafelt was submitted to ufo-hunters.com in early April 1998. It states that a group of people were walking through a wooded area when they noticed a light in the sky.

“We looked up and saw the ship in the sky. It changed from an oval shape to a disc shape before our eyes. There was a bright flash of light and I found myself in the spacecraft,” the report read.

“I noticed a few oval shaped heads surrounding me. I was momentarily stunned and couldn’t move. When I woke up I was on a cold bench. The ‘beings’ were operating on me and I have the scars to prove it.”

The person then said that the group was returned to the spot where they left, but arrived three hours before they had left. The person who made the reports said they still “have flashbacks to this day.”

A report made to ufoinfo.com by three witnesses in Limavady says that they spotted “a very bright fiery object in the sky” just after Christmas Dinner in 2008.

“My first impressions where that it was a plane on fire because of the intense orangey red light emanating from the object,” the report read.

“The fieryness of the object changed into three circular disks in a triangular formation as it moved away.”

“My grandson reckoned it was Santa Claus going home after a busy night!!!”

There were also two separate reports of three orange spheres flying in a line over Limavady on the same day in February 2008.
No definitive explanation for what they experienced that day has ever been found.

A couple driving between Portglenone and Bellaghy in December 2011 reported seeing a flashing blue light in the sky, which “shot across just above the horizon & stopped at a position of 9 o’clock in relation to the car.”

“It had stopped flashing at this stage and stayed completely still for approx two seconds. It then shot across to a positon of 7 o’clock, stayed still for approx one second then disappeared.”

A student living in Ballykelly said that they saw four crafts in the sky in September 2013, one of which was “the shape of a traffic cone” and then saw another craft they described as “the shape of a modern set of bathroom scales or something, oval, and curved in the middle.”

He said that he had a feeling of “peace and a sort of inner understanding” as he watched the objects, but later became afraid and went inside.

“I did this as although I have quite a big interest in UFOs and extra-terrestrials, at that time I did not want to be abducted.”

A report from Portstewart in March 2016 speaks of a silent moving light in the sky, which had flashing red, blue and white lights, while an October 2010 report from Coleraine mentions an orange light and an oblong object “with four wings in the shape of bent arms (crablike)” that suddenly shot up into the sky.

Chris McMurray, Chairperson of the Northern Ireland UFO Society said that reports of UFOs in the north appear to be becoming more frequent. However, he said that many reports can be easily explained as sightings of Chinese lanterns, satellites, aircraft or even planets, particularly Venus.

“The two biggest headaches for UFO researchers and investigators are Chinese lanterns and more recently, drones. Drones can be bright and seem silent at a distance at night and appear to pull off impossible manoeuvres, of which can’t be attributed to any conventional manned aircraft,” he said.

Mr McMurray added that there were cases that could not be explained and that they tend to occur at “sites of historical significance.”

“A lot of ancient sites tend to be built on or near places where natural energy produced by the earth is significantly stronger than elsewhere. These are called primary nodal points, and structures such as the great pyramids in Egypt, Stonehenge in England and even military establishments are reported to be near them,” he said.

He said that he was “sceptical” of the report of an abduction in Magherafelt and said that such a case “would always merit a one to one interview with the abductee to establish if they’re fabricating their story or not.”

“Demonologists would also have an interest here as they tend to believe that demonic entities are behind hallucinations which are interpreted as alien abductions,” he said.

No definitive explanation for the experiences has ever been found.