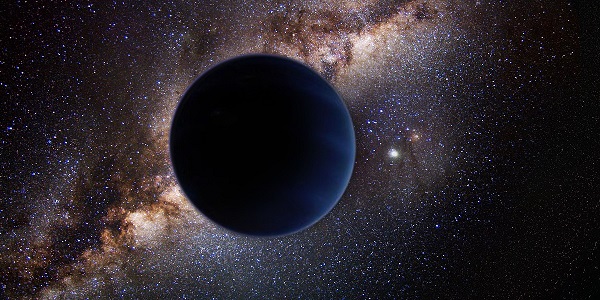 The hunt is on to find “Planet Nine” — a large undiscovered world, perhaps 10 times as massive as Earth and four times its size — that scientists think could be lurking in the outer solar system. After Konstantin Batygin and Mike Brown, two planetary scientists from the California Institute of Technology, presented evidence for its existence this January, other teams have searched for further proof by analyzing archived images and proposing new observations to find it with the world’s largest telescopes.

Just this month, evidence from the Cassini spacecraft orbiting Saturn helped close in on the missing planet. Many experts suspect that within as little as a year someone will spot the unseen world, which would be a monumental discovery that changes the way we view our solar system and our place in the cosmos. “Evidence is mounting that something unusual is out there — there’s a story that’s hard to explain with just the standard picture,” says David Gerdes, a cosmologist at the University of Michigan who never expected to find himself working on Planet Nine. He is just one of many scientists who leapt at the chance to prove — or disprove — the team’s careful calculations.

Batygin and Brown made the case for Planet Nine’s existence based on its gravitational effect on several Kuiper Belt objects — icy bodies that circle the sun beyond Neptune’s orbit. Theoretically, though, its gravity should also tug slightly on the planets, moons and even any orbiting spacecraft. With this in mind, Agnès Fienga at the Côte d’Azur Observatory in France and her colleagues checked whether a theoretical model (one that they have been perfecting for over a decade) with the new addition of Planet Nine could better explain slight perturbations seen in Cassini’s orbit. Without it, the eight planets in the solar system, 200 asteroids and five of the most massive Kuiper Belt objects cannot perfectly account for it. The missing puzzle piece might just be a ninth planet.

Researchers say an anomaly in the orbits of distant Kuiper Belt objects points to the existence of an unknown planet orbiting the sun.

So Fienga and her colleagues compared the updated model, which placed Planet Nine at various points in its hypothetical orbit, with the data. They found a sweet spot—with Planet Nine 600 astronomical units (about 90 billion kilometers) away toward the constellation Cetus — that can explain Cassini’s orbit quite well. Although Fienga is not yet convinced that she has found the culprit for the probe’s odd movements, most outside experts are blown away. “It’s a brilliant analysis,” says Greg Laughlin, an astronomer at Lick Observatory, who was not involved in the study. “It’s completely amazing that they were able to do that so quickly.” Gerdes agrees: “That’s a beautiful paper.”

The good news does not end there. If Planet Nine is located toward the constellation Cetus, then it could be picked up by the Dark Energy Survey, a Southern Hemisphere observation project designed to probe the acceleration of the universe. “It turns out fortuitously that the favored region from Cassini is smack dab in the middle of our survey footprint,” says Gerdes, who is working on the cosmology survey. “We could not have designed our survey any better.” Although the survey was not planned to search for solar system objects, Gerdes has discovered some (including one of the icy objects that led Batygin and Brown to conclude Planet Nine exists in the first place).

Laughlin thinks this survey has the best immediate chance of success. He is also excited by the fact that Planet Nine could be so close. Although 600 AUs—roughly 15 times the average distance to Pluto—does sound far, Planet Nine could theoretically hide as far away as 1,200 AUs. “That makes it twice as easy to get to, twice as soon,” Laughlin says. “And not just twice as bright but 16 times as bright.” 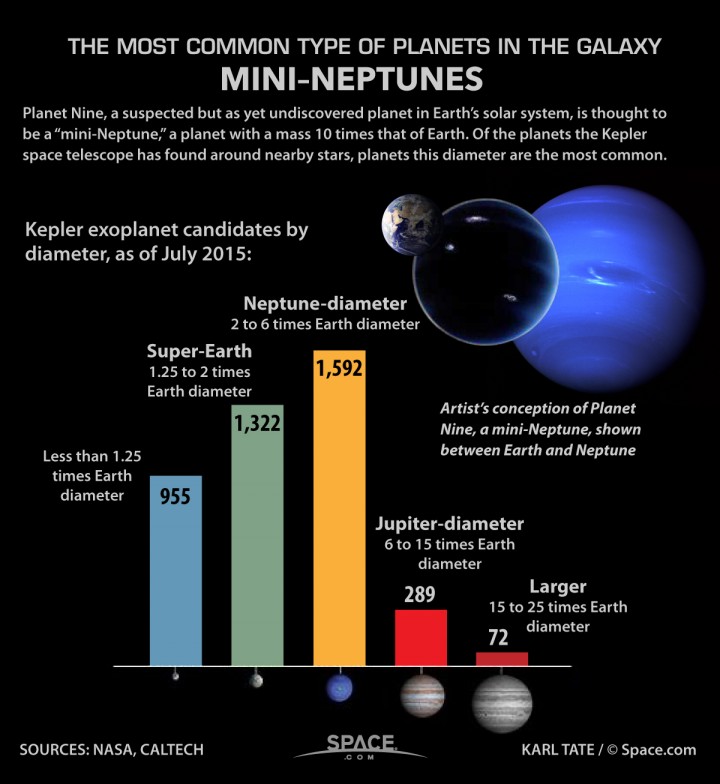 Mini-Neptunes like “Planet Nine” outnumber other types of planets found by astronomers.

And the Dark Energy Survey is not the only chance to catch the faint world. It should be possible to look for the millimeter-wavelength light the planet radiates from its own internal heat. Such a search was proposed by Nicolas Cowan, an exoplanet astronomer at McGill University in Montreal, who thinks that Planet Nine might show up in surveys of the cosmic microwave background (CMB), the pervasive afterglow of the big bang. “CMB experiments have historically used solar system giant planets to calibrate their instruments, so we know that current and planned CMB experiments are sensitive enough to measure the flux from Planet Nine if it is as bright as we think it is,” Cowan says.

Already, cosmologists have started to comb through data from existing experiments, and astronomers with many different specialties have also joined in on the search. “I love that we can take this four-meter telescope and find a rock 100 kilometers in diameter that is a billion kilometers past Neptune with the same instrument that we are using to do extragalactic stuff and understand the acceleration of the universe,” Gerdes says.

In the meantime Batygin and Brown are proposing a dedicated survey of their own. In a recent study they searched through various sky maps to determine where Planet Nine cannot be. “We dumpster-dived into the existing observational data to search for Planet Nine, and because we didn’t find it we were able to rule out parts of the orbit,” Batygin says. The zone where the planet makes its farthest swing from the sun as well as the small slice of sky where Fienga thinks the planet could be now, for example, have not been canvassed by previous observations. To search the unmapped zones, Batygin and Brown have asked for roughly 20 observing nights on the Subaru Telescope on Mauna Kea in Hawaii. “It’s a pretty big request compared to what other people generally get on the telescope,” Brown says. “We’ll see if they bite.” If they do, Brown is convinced he will have his planet within a year.

“I really want to see what it looks like,” says Batygin, who adds that his aspiration drives him to search for the unseen world. But Laughlin takes it a step further: “I think [the discovery] would provide amazing inspiration for the next stage of planetary exploration,” he says. We now have another opportunity to see one of the worlds of our own solar system for the first time. “If Planet Nine isn’t out there, we won’t have that experience again.”