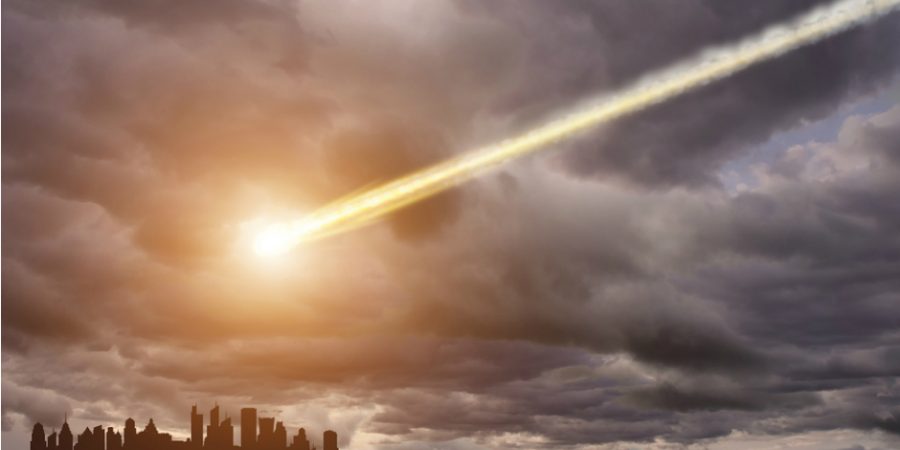 A recently discovered near Earth object may be cause for serious concern based on NASA’s current data (though this could potentially change). Near Earth Object object ‘2017 AM4’ is approximately .500 km or .311 miles in size.

I (Stargazer, a writer here on BENDEDREALITY) often keep an eye on NASA’s NEO (Near Earth Object) Impact Risk table. Recently there was an object that was highlighted and listed as 1 on the Torino scale and a -1.73 on the Palermo scale (FYI, it is extremely rare that an object every shows up as anything but 0 on the Torino scale).

Here is a quick explanation of the scales to help understand it all:

The Torino Scale is a method for categorizing the impact hazard associated with near-Earth objects (NEOs) such as asteroids and comets, there is a snapshot of it further in the article. The Palermo Technical Impact Hazard Scale is a logarithmic scale used by astronomers to rate the potential hazard of impact of a near-earth object (NEO).

That’s where all the calmness ends.

I decided to take a look today (Jan 19, 2017) just to see “what’s new” and to my surprise here was this object ‘2017 AM4’ back on the Torino Scale listed as a 1 (the lowest risk on the scale is ‘0’). So the object was not only back on the Torino scale but what was truly disturbing was that now it was listed as -0.65 on the Palermo scale (remember for the Palermo scale the lower the number the more serious the possibility of impact and if it goes into a positive number then the risk is severe). So this went from a -1.73 to a -0.65!! This is the lowest I’ve ever seen on the scale since I’ve been checking it over many years. So what does that mean, well here a bit more details on how to interpret the Palermo scale if you need further explantion:

“The Palermo Technical Impact Hazard Scale was developed to enable NEO specialists to categorize and prioritize potential impact risks spanning a wide range of impact dates, energies and probabilities. Actual scale values less than -2 reflect events for which there are no likely consequences, while Palermo Scale values between -2 and 0 indicate situations that merit careful monitoring. Potential impacts with positive Palermo Scale values will generally indicate situations that merit some level of concern.

So after reading that you would have likely gathered that this object falls into the -2.00 to 0 (it is a -0.65) which mean it is a situation that merits careful monitoring. That said, they have been monitoring it, and the risk has only gotten higher instead of decreasing.

Below is a snap shot I took of the NEO RISK table: 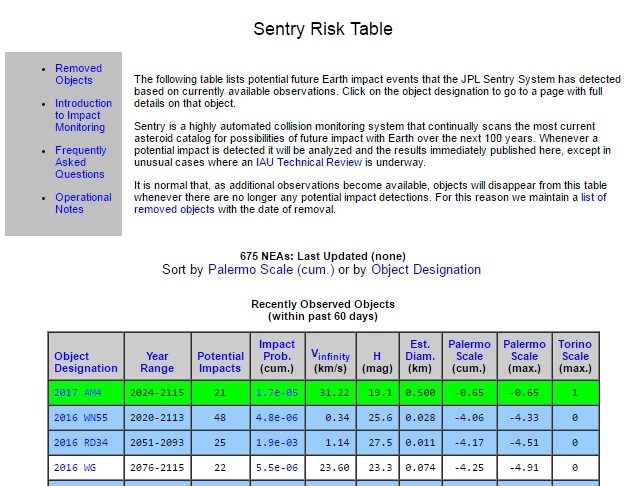 Just for your knowledge, here is a snap shot of the Torino Scale: 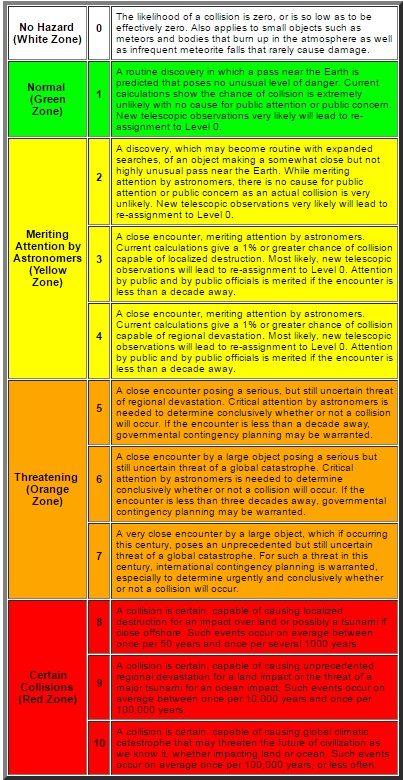 You’ll note that the object in question here is listed as a ‘1’ on the Torino scale as mentioned earlier. Click on the link if you would like to see the actual SCALE ON NASA’s Website

Now to be honest I don’t know enough to say for certain this is a for sure thing, maybe even NASA isn’t sure as yet as sometimes they have to make more observations in the months coming in order to really be sure. So the risk might disappear all together or then again it could be concluded as complete certainty of impact. We will have to wait and see how this develops. I plan on contacting NASA to try and get more information on this situation, I will update as possible. Update: I have in fact gone ahead and sent an email to NASA to try and acquire some more information on this so as of now just waiting to hopefully get a response at some point and I will share it with everyone as becomes available.

A version of this article was originally posted on our new forum: IS NEO ‘2017 AM4’ A SERIOUS IMPACT THREAT IN 2024?

UPDATE: As of now I have not received a reply from NASA regarding NEO 2017 AM4, however the object has since been removed from their threat list so I’m assuming that after further observations it is not deemed a threat, or maybe for some other reason.

IF YOU LIKE BENDEDREALITY.COM PLEASE TELL OTHERS ABOUT US…SHARING IS CARING
HAVE A COMMENT? LEAVE YOUR COMMENT BELOW
Republishing of this article is allowed with full attribution/credit to the author and this site (bendedreality.com).