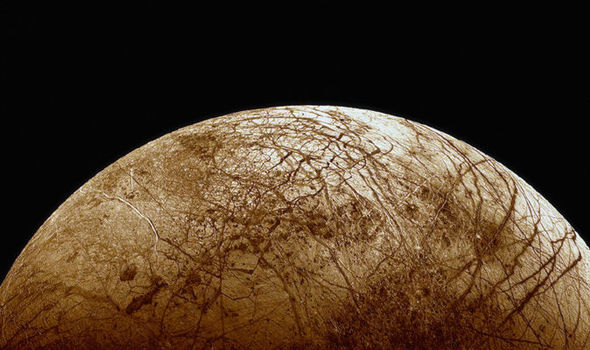 Is there LIFE on Europa? NASA to Announce Major News in Breakthrough Press Conference

NASA has called a press conference on Monday when the space agency will announce a breakthrough on Europa.

The US group sent out a cryptic message, stating that there is “surprising activity” on Europa – the most well known of Jupiter’s 67 moons.

NASA has been analysing data from its Hubble Space Telescope which is currently prowling the universe.

The space experts said in a statement announcing the event on Monday, to be broadcast live at 7PM UK time: “Astronomers will present results from a unique Europa observing campaign that resulted in surprising evidence of activity that may be related to the presence of a subsurface ocean on Europa.”

Most scientists agree that where there is water, it massively increases the chances of finding life.

Europa has long been touted as a possible host of life elsewhere in the Solar System, and even boffins working on the Juno Probe, which is currently in orbit around Jupiter, believe that it could be a likely habitable zone for some lifeforms.

When asked why Juno has to be intentionally destroyed at the end of the mission, Juno project scientist Steve Levin said that they don’t want to contaminate any potential life in that are.

He added: “We think Jupiter’s icy moon Europa has a subsurface ocean of liquid water; and because everywhere on Earth that we’ve found water, we’ve also found life, this is a good place for us to search.”

However, many are not convinced and believe the announcement will relate solely to the discovery of water on Europa.

NASA called a similar emergency press conference when they announced the discovery of flowing water on Mars.

It was only last year that Alfred McEwen, professor of planetary geology at the University of Arizona, and his team found evidence of water on Mars, and even found that water was still flowing on the surface.

Since then, efforts to find life on the Red Planet have been upped.