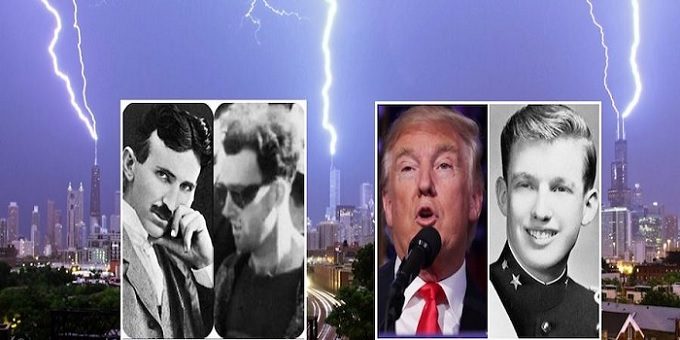 Is this Photographic Evidence that Donald Trump is Time Traveller John Titor?

President Donald Trump may be the legendary time traveller John Titor, who travelled back to Earth in 2000 to warn humanity about an impending global nuclear war.

A photo has emerged online of lightning hitting the Trump Tower in Chicago on the day the polls closed during the US presidential election race last year. According to John Titor researchers, Donald Trump may have harnessed the energy from the lightning using techniques learned through Nikola Tesla, in order to harness the energy to run a time machine.

The bizarre theory which recently appeared in a 4chan forum claims to be a compelling explanation for Donald Trump’s shock victory in the election last year.

It says that Trump’s uncle John saw Tesla’s plans for a time machine while investigating his work in 1943.

After three days looking at the notes John Trump published a report saying that he had found nothing which was not “speculative, philosophical, and somewhat promotional” in character.

The theory goes that John Trump handed the information on to the president-to-be Donald Trump.

On the night of the GOP nomination, when Trump was confirmed as the Republican to run for president of the United States, lightning struck his tower in Chicago during a storm.

Many claimed in the 4chan forum that this proves that Trump harnessed the power of this lightning storm and tinkered around with time on the night that he was nominated on March 15, 2016.

Instagram user @mrmikeyv posted a video of the strike with the caption: “Lightning storm ironically hitting the Trump building on #supertuesday”.

Trump soon became the front-runner in the race to the White House and went on to win the US presidency.

Time travelling John Titor appeared in an online forum back in 2000 and claimed to come from a future ravaged by the effects of a nuclear war.

He also warned of corrupt governments and war with ISIS before suddenly vanishing from the internet.

Some claim that John Titor was simply an online hoax, but some of his predictions came true and today his statements continue to make people wonder.