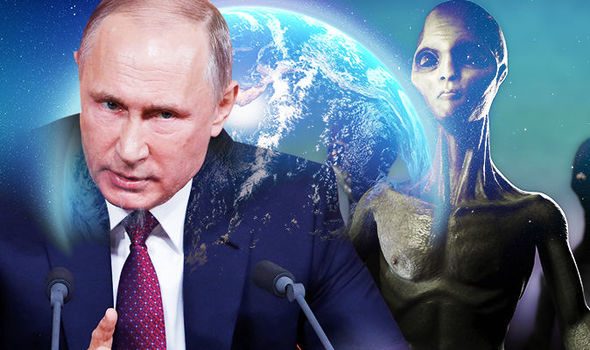 Could RUSSIAN President Vladimir Putin be the man to make world history by announcing intelligent aliens exist and have visited Earth, a conspiracy theorist believes yes, after spending a week in Moscow is calling on the Kremlin to acknowledge extraterrestrials.

The Paradigm Research Group (PRG) based in the US believes an unproven conspiracy theory that world powers are concealing a massive secret that intelligent aliens regularly visit Earth and work with governments under top-secret projects.

Steve Bassett, PRG founder, is the only registered lobbyist in the US on the issue of so-called alien disclosure.

However, he does not believe Donald Trump is the man to tell the world the truth and headed to Russia to try to push for Mr Putin to take the lead.

US citizen, Mr Bassett, spent a week in Russia trying to convince Mr Putin of the importance of lifting an alleged “truth embargo” that he claims stops world leaders telling the public the truth about aliens.

Mr Bassett believes the alleged embargo has been in place since at least 1947 when a flying saucer allegedly crash landed at Roswell, New Mexico.

He was interviewed for a Russian documentary during his visit, and has now released unedited clips from the interview.

Mr Bassett told REN TV: “I have specifically brought up my intrigue as to why Putin did not take this legacy in the 26 years since the end of the Cold War and make the announcement to be the disclosure president.

“I sort of understand, but given that the nation and head of state that makes the first official confirmation of the ET presence, that nation will immediately move to the centre of the stage.

“In the view of the people it will be elevated to an incredible stature as the bringer of the most profound thing ever, it is an incredible opportunity.

“If I had two minutes with Putin, my only question would be why do you not tell people about the ET presence. I believe Vladimir Putin is well aware of the ET presence.”

While in Moscow, Mr Bassett also held meetings with a number of groups addressing alleged extraterrestrial phenomena in Russia. These groups included a number of former Soviet and Russian military and agency officials.

Mr Bassett said: “There has always been a considerable, open engagement of extraterrestrial related phenomena within Russia and the Soviet Union by the public and the government.”

A PRG statement said: “In the full interview held at REN TV’s studio Bassett covered a broad range of topics including various considerations that might prompt Russian President Vladimir Putin to make the first formal acknowledgment by a head of state regarding an extraterrestrial presence engaging the human race.

“In this regard the interview was unprecedented as it is the first time anyone has made this argument on Russian media inside or outside Russia.

“PRG has repeatedly stated in American media that Vladimir Putin is the most likely head of state at this time to formally acknowledge an extraterrestrial presence and provide new evidence from Russian military sources to back up the announcement.

“Should that happen the geopolitical consequences for the United States would be considerable.”