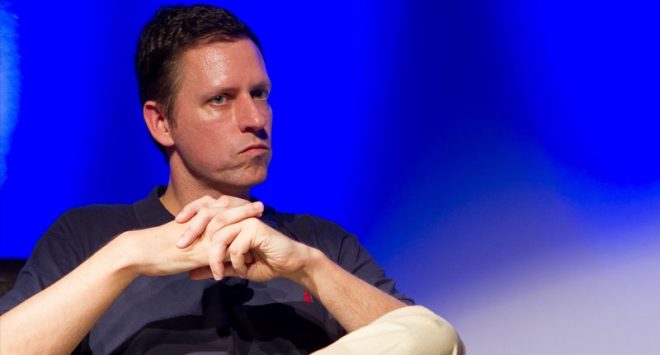 Editor’s Comment: Looks like now there will be a need for a new “DONATE” button, one for donating blood…get it? get it? {hears crickets chirping and looks around}..you know, like the Paypal donate button haha! sorry couldn’t resist…

Billionaire PayPal founder Peter Thiel said that he believes transfusions of blood from young people can reverse his aging process and allow him to live a vastly extended lifespan.

In an interview with Inc.com’s Jeff Bercovici, Thiel said that the practice — known as parabiosis — is the closest modern science has come to creating an anti-aging panacea.

Thiel — a hedge funder who acted as a delegate for Donald Trump and spoke at the 2016 Republican National Convention — is reportedly obsessed with defying death and extending the human lifespan. He has injected funds into startups that are experimenting with ways to forestall the body’s inevitable decline and death.

“I’m looking into parabiosis stuff,” Thiel told Bercovici, “where they [injected] the young blood into older mice and they found that had a massive rejuvenating effect. … I think there are a lot of these things that have been strangely underexplored.”

Parabiosis experiments began in the 1950s with crude exercises in which rats were cut open and their circulatory systems restructured and manipulated. Recently, some companies have been advancing human trials with parabiosis. Bercovici wrote that U.S. studies in the field are currently lagging behind trials in China and Korea.

A California company called Amrbosia is conducting human trials in which healthy people aged 35 or older receive transfusions of blood plasma from people under 25. Participants pay $8,000 to take part and their health is closely monitored for the two years they receive the transfusions. Participants must live in or have the means to travel to Monterey, CA.

Ambrosia’s founder Jesse Karmazin told Bercovici that participants experience a reversal of aging systems across every major organ system. Furthermore, the results appear to be long-lasting, he said, if not permanent.

“The effects seem to be almost permanent,” Karmazin said. “It’s almost like there’s a resetting of gene expression.”

Jason Camm — chief medical officer at Thiel Capital — reached out to Karmazin, saying that the company is interested in his studies. Camm is listed on his LinkedIn page as, “Personal Health Director to Peter Thiel … and a number of other prominent Silicon Valley business leaders and investors.”

In an interview last year, Thiel told Bercovici that our culture is “a little too biased against all these things” that purportedly prolong life. When the reporter asked Thiel if he was looking at parabiosis as a business opportunity or a personal medical decision, Thiel said the latter. The practice, he said, isn’t necessarily patentable, which compromises its potential money-making value.

However, he said, the FDA needn’t get involved or study the practice because, “it’s just blood transfusions.”

There are rumors that some wealthy individuals in Silicon Valley are doing courses of parabiosis, but Thiel said last year that he hadn’t “quite, quite, quite started yet.” A spokesman for Thiel capital said that nothing has changed since then.

Gawker reported that it received a tip claiming Thiel “spends $40,000 per quarter to get an infusion of blood from an 18-year-old based on research conducted at Stanford on extending the lives of mice.”

Thiel is locked in a grudge match with Gawker after the website outed him as gay in 2007. Resenting the intrusion into his private life, Thiel quietly funded a multimillion dollar lawsuit against the website by pro wrestler Hulk Hogan.

The lawsuit was successful and Gawker is now struggling against bankruptcy and is due to go up for auction later this summer. On Monday, Gawker editor in chief Nick Denton filed for personal bankruptcy after a Florida court refused to grant him an emergency stay on the verdict.