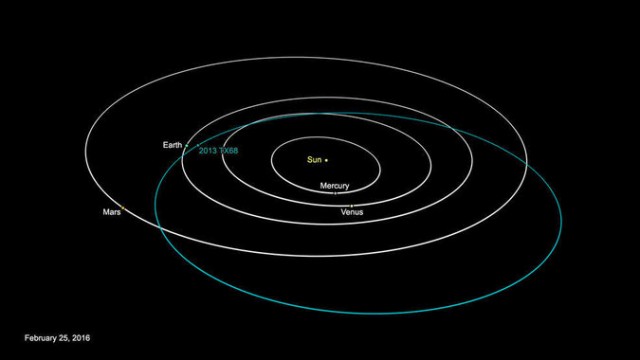 We’re going to get an extraterrestrial visitor, perhaps early next week, when asteroid 2013 TX68 zips past Earth. There’s been some agitated chatter about just how close the speeding rock will get.

“What we know for sure is that it will not collide,” said Sean Marshall, a Cornell University doctoral candidate who observes near-Earth asteroids. “So don’t panic.”

The size of 2013 TX68 is estimated to be 100 feet in diameter, about the size of a large yacht. This makes it slightly larger than the speeding rock that in 2013 exploded over the Russian city Chelyabinsk, damaging hundreds of buildings and injuring at least 1,500 people, mainly as windows shattered.

The exact time and distance of the closest approach will not be known until after the encounter. Mr. Marshall said Tuesday that 2013 TX68 could zip through Earth’s ring of geostationary satellites — which orbit at a height of 22,300 miles — or travel as far away as 40 times the distance to the moon.

NASA’s calculations last month put the flyby at around March 8. 2013 TX68 is not on the agency’s list of potentially hazardous asteroids, which come closest to Earth and are big enough to survive atmospheric re-entry and cause damage on a regional scale. Their diameters are greater than 330 feet, or about 100 meters.

But the extraterrestrial rock might eventually make the hazard list if new observations made during this month’s close pass reveal its diameter to be larger than expected.

“It’s possible but unlikely,” Mr. Marshall said of the larger size in an interview. “Still, you wouldn’t want to be there if it hit. It could still wipe out a city.” – nytimes