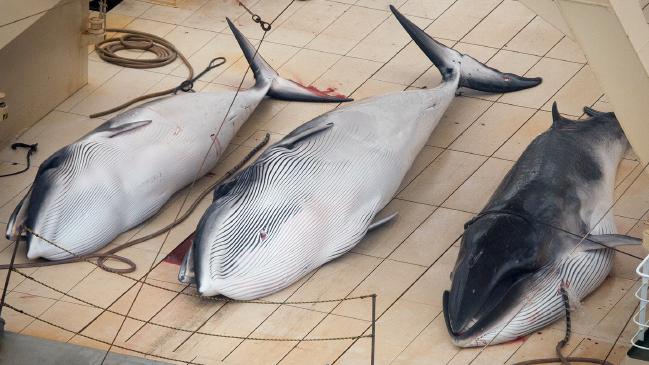 Sorry if this is hard for some to read about, but it is the reality for these innocent and gentle beings, it is important that people know what is happening to them at the hands of these Japanese ‘whalers’ under the guise of ‘research’. 🙁

As Premier Annastacia Palaszczuk flew to Japan for a trade mission on Tuesday, a global conservation group called on her to lobby the Japanese government to end whaling.

A new International Whaling Commission (IWC) report reveals that 95 per cent of the female whales slaughtered by the Japanese were carrying calves.

“Apparent pregnancy rate of sampled animals was high”, the Japanese whalers stated in a new report to IWC’s scientific committee meeting in Slovenia this month.

“One or two minke whales were sampled randomly from each … school using harpoons with a 30g penthrite grenade.”

The whalers killed one in every three of the protected marine mammals they spotted.

Eleven whales managed to avoid the harpoons by hiding in water with high-density ice.

Commercial whaling was banned more than 30 years ago but Japan continues to hunt by using a loophole to kill whales for “scientific research”.

The Humane Society International (HSI) blasted the harpooning of pregnant whales as “truly gruesome and unnecessary”.

HSI senior program manager Alexia Wellbelove said the “scientific whaling” was a front for the meat trade, as the whales were taken back to Japan for human and pet food.

“The killing of 122 pregnant whales is a shocking statistic and sad indictment on the cruelty of Japan’s whale hunt,” she said on Tuesday.
Ms Wellbelove called on Ms Palaszczuk to use her visit to Japan to lobby its government to stop whaling.

“They claim it’s necessary to understand whale biology but that information can be obtained through a biopsy,” Ms Wellbelove said.

“The whales often get used for pet food.”

The IWC report, wrtten by employees of the Institute of Cetacean Research in Tokyo, the Kyodo Senpaku fishing company and Tokyo University, said the whales were killed to obtain data on the “age, sexual maturity and body length of the whales”.

The Japanese analysed the stomach content to “estimate prey consumption” and measured blubber thickness to “study the nutritional condition” of the dead whales.