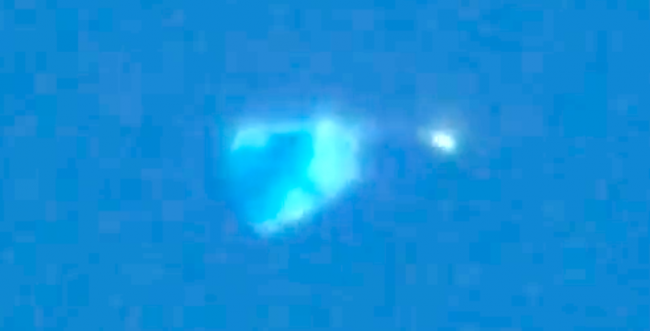 Have UFO hunters just sighted a gigantic, glowing creature ‘swimming through the sky’ over Mexico?

Or is it just a plastic bag?

Tireless alien-hunter Scott C Waring of UFO Sightings Daily says, ‘It is not often you get to see a UFO that moves like a living, breathing animal, but this is one of those.

‘Such creatures do exist in space and have been recorded on live cam, but to see them in our sky, that is even more rare.’

Even die-hard UFO fans are a little sceptical of this supposed ‘sighting’ – with one saying, ‘I totally believe in UFOs, but that kinda looks like a torn blue bag caught in an air current.’

Nigel Watson, author of the UFO Investigations Manual, says that the idea of ‘living creatures’ swimming through our skies is not new.

Watson says, ‘The idea that ET type sky creatures exist in our skies was put forward by Charles Fort who was a great collector of mysteries in the early part of the 20th Century. In his book Lo! He notes:

‘”Unknown, luminous things, or beings, have often been seen, sometimes close to this earth, and sometimes high in the sky. It may be that some of them were living things that occasionally come from somewhere else.“

‘Arthur Conan Doyle the creator of Sherlock Holmes even penned a story in 1913 called The Horror of the Heights that imagines semi-solid sky creatures gobbling up aviators. When the hero of the story goes up to get evidence of their existence he never comes back, all that remains is a blood stained notebook that ends with the words:

‘”Forty-three thousand feet. I shall never see earth again. They are beneath me, three of them. God help me; it is a dreadful death to die!”

‘Ufologist, Trevor Constable, pioneered the photography of UFOs using infrared film during the 1960s. He considered UFOs to be biological beings, which live in the sky. As they come closer to Earth, they become more visible and they can fire bolts of lightning to defend themselves. In his 1958 book They Live in the Sky he says these creatures are invisible to our eyes, but infrared film can capture images of them as they fly above us. Today, some ufologists have adapted video cameras to capture infrared images of UFOs.’

‘Perhaps there are luminous or ‘invisible’ jelly-fish like creatures that inhabit our skies, I’m not totally convinced but it is a fascinating theory that makes a change from starships loaded with aliens!’