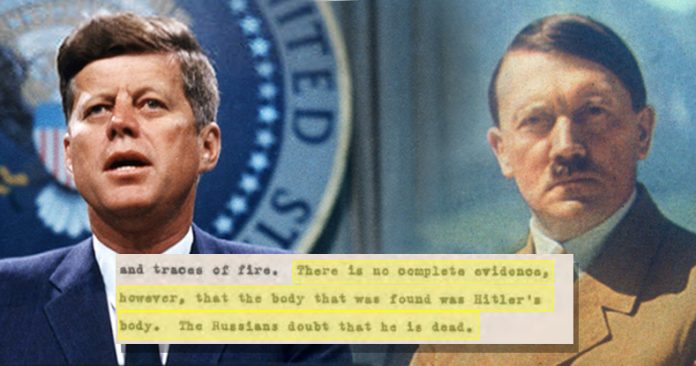 If you aren’t convinced, you’re in good company — recently revealed documents from a personal journal make candid skepticism from a man who could arguably be termed the Führer’s polar opposite — President John F. Kennedy.

While questioning the official narrative pertaining to one of the most opprobrious tyrants in history might not be a comfortable matter, the theory has gained wide traction from a number of reputable sources and analyses in recent years — but, apparently, the beloved former president harbored qualms about the April 30, 1945 deaths.

“Hitler’s Reich Chancellery was a shell,” Kennedy penned in 1945, several years before ascending to the White House.

“The walls were chipped and scarred by bullets, showing the terrific fight that took place at the time of its fall. Hitler’s air-raid shelter was about 120 feet down into the ground — well furnished but completely devastated. The room where Hitler was supposed to have met his death showed scorched walls and traces of fire. There is no complete evidence, however, that the body that was found was Hitler’s body. The Russians doubt that he is dead.”

That Kennedy and Hitler share in common entire tomes positing theories on their lives and the manner of their deaths makes the former president’s skepticism on the latter’s dubious demise an especially fitting observation.

Perhaps the more skeptical of readers find the diary entry evidence of a capricious pet theory held by a man otherwise known for rational, considered thought. But Kennedy’s words, particularly in the present context in which they’ve been disclosed, align with a growing body of academics and historians who have studied Hitler’s demise — and find exigent fault with what we’ve so long been led to believe.

After all, the United States clandestinely undertook Operation Paperclip during the aftermath of World War II. While the world sighed with relief upon the cessation of military hostilities, United States officials — unbeknownst to their own colleagues and peers — ferreted away former Nazi party officials and scientists to various safe havens.

“Though much information about what has alternately been called Project Paperclip remains classified, that Nazi scientists did receive paychecks courtesy of the U.S. government to advance national goals is admitted fact. In that context, would Hitler being given a similar VIP escape plan be that outside the realm of possibility?”

Published last summer in Argentina, in El Exilio de Hitler, or Hitler in Exile, Basti throws the long-swallowed account of murder-suicide into a tailspin, but — lest the idea an infamous figure, condemned the world over, managed escape with assistance from shadowy State players sound the stuff of armchair theorist — even corporate media mainstays like the Huffington Post have published articles outlining the premise of the book.

“There was an agreement with the US that Hitler would run away and that he shouldn’t fall into the hands of the Soviet Union. This also applies to many scientists, the military and spies who later took part in the struggle against the Soviet regime,” Basti writes.

A tunnel in the basement of the Chancellery linked to a proximate airport, providing the despotic leader and his wife the fastest possible escape route for the time period — a helicopter awaited to ferry the pair to Spain, where Basti says they made their way to the Canary Islands. A U-Boat then delivered Hitler to Argentina for, all told, a ten-year stay before he proceeded to Paraguay, where he faced no difficulties living under President Alfredo Stroessner — whose father hailed from Germany’s Bavaria region — until February 3, 1971, when Basti believes he finally died.

“Wealthy families who helped him over the years were responsible for the organisation of his funeral,” writes Basti. “Hitler was buried in an underground bunker, which is now an elegant hotel in the city of Asuncion [Paraguay]. In 1973, the entrance to the bunker was sealed and 40 people came to say goodbye to Hitler. One of those who attended, Brazilian serviceman Fernando Nogueira de Araujo, then told a newspaper about the ceremony.”

And if that information feels untenable coming from an independent authority — irrespective of the depth of research and scrutiny — perhaps documents from a more traditional source can lend it credence.

Documents released by the FBI describe in greater detail a similar flight to freedom by Hitler, as recounted by an unnamed witness who putatively assisted in the effort for the tidy sum of $15,000, but admitted involvement under the weight of heavy conscience.

One nagging disparity in the approved account of Hitler’s demise is that his body was never actually recovered from the scene — though some versions say severe charring made identification impossible, while others claim the lifeless newlyweds’ bodies were burned with others en masse in an outdoor pit. In fact, that Hitler perished by gunshot to the head, and Braun by cyanide pill, appears to have come from one man who asserted to have witnessed what happened — meaning, the official account has for over six decades hinged on the arbitrary claims of a single person, rather than exhaustive investigation.

JFK’s diary obviates the studied skepticism and diplomatic rhetoric of someone either privy to further information than apparent, or one who examined what happened and perhaps felt it untenable enough to seek more.

“He had boundless ambition for his country which rendered him a menace to the peace of the world,” Kennedy keenly opined on the autocrat’s particular perversion of nationalism, “but he had a mystery about him in the way that he lived and in the manner of his death that will live and grow after him.”

Contemplating Hitler’s astronomical popularity — and the woefully misbegotten goals such charisma tacitly permitted — the future president lamented privately the Nazi leader’s mysterious life, “He had in him the stuff of which legends are made.”