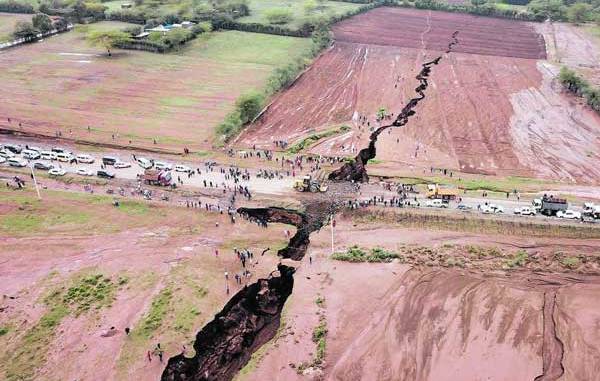 Scary prospect to have an entire continent split in two. The Earth never stops changing.

It’ll take tens of millions of years, but Africa may eventually split into two parts.

While geologists have known about this possibility for a while, it became news recently when a large crack, stretching several miles in length, made a sudden appearance in southwestern Kenya following heavy rain.

The tear, which continues to grow, collapsed part of a highway and “was accompanied by seismic activity in the area,” said Lucia Perez Diaz, a postdoctoral researcher on tectonics at Royal Holloway, a university in London.

The crack is located in a region known as the East African Rift Valley. It measures more than 50 feet in depth and 65 feet across, according to National Geographic. A rift valley refers to a lowland region where tectonic plates rift, or move apart.

A crack that opened up in Kenya’s Rift Valley, damaging a section of the Narok-Nairobi highway, is still growing… pic.twitter.com/T5YocDauYj

The valley stretches over 1,800 miles from the Gulf of Aden in the north towards Zimbabwe in the south, splitting the African plate into two unequal parts: the smaller Somali plate and much larger Nubian plate, Perez Diaz noted.

Eventually the rift should expand and break Africa into two continents: The smaller continent will include present-day Somalia and parts of Kenya, Ethiopia, and Tanzania, while the bigger one will include everything else.

“A rift like this once eventually separated the African and South American continents to form the Atlantic Ocean, and the rift in east Africa may be the very early stages of this,” said Christy Till, an Arizona State University geologist. “The process just occurs very slowly and takes millions of years.” 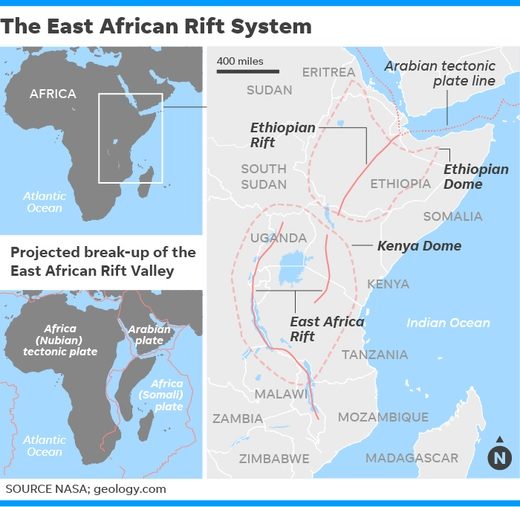 In the U.S., the southwest is sliced by the Rio Grande Rift Valley, which stretches from Chihuahua, Mexico, to Colorado, according to National Geographic. Its formation, roughly 30 million years ago, is responsible for the Rio Grande River bordering the southern U.S.

“Dramatic events, such as sudden motorway-splitting faults or large catastrophic earthquakes may give continental rifting a sense of urgency but, most of the time, it goes about splitting Africa without anybody even noticing,” Perez Diaz said.

So this will happen in the next 50M yrs. Can't wait pic.twitter.com/g2uogxK9or