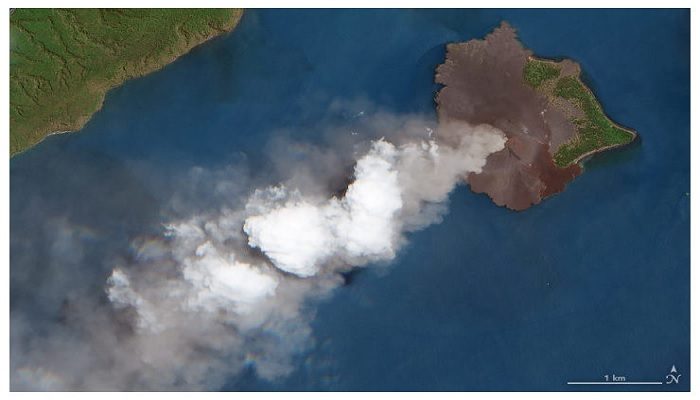 This would be big trouble in respect to global cooling if this has a large eruption.

You may also find this article to your liking (give it a read after): A Single Volcano is Capable of Changing Earth’s Entire Atmosphere

via Watts Up with That:

The volcanic island of Krakatau (previously called Krakatoa) is situated in the Sunda Strait between the islands of Java and Sumatra in the Indonesian province of Lampung. The name is also used for the surrounding island group comprising the remnants of a much larger island of three volcanic peaks which was obliterated in a cataclysmic 1883 eruption.

In 1927, a new island, Anak Krakatau, or “Child of Krakatoa”, emerged from the caldera formed in 1883 and is the current location of eruptive activity.

In the NASA photos below, you can see some stunning images of the volcano as it’s been stirring to life again 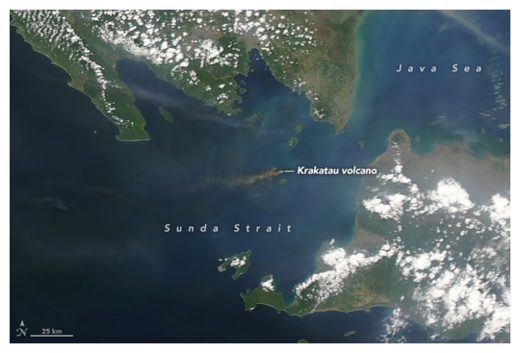 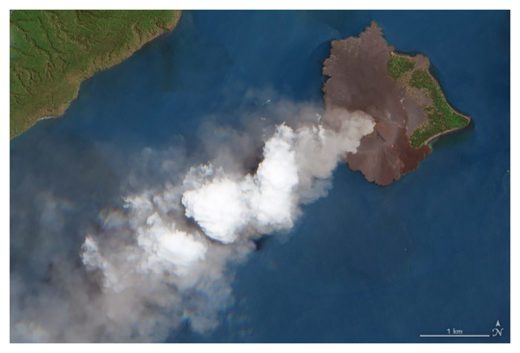 The Moderate Resolution Imaging Spectroradiometer (MODIS) on NASA’s Aqua satellite acquired the wide view (top) on September 24. The MultiSpectral Instrument (MSI) on the European Space Agency’s Sentinel-2 acquired the detailed image (second) on September 22. Both images show volcanic ash and steam streaming southwest over the waters of the Sunda Strait.

Local sources reported that this eruption has been ongoing since June 19, 2018. Ash plumes have been observed rising to altitudes up to 1.8 kilometers (6,000 feet). As of September 24, the eruption had not yet affected air travel in southeast Asia, according to news reports. The local alert status remained at “caution,” which is the second-highest level.

The plume was also visible from the International Space Station. European Space Agency astronaut Alexander Gerst snapped this photograph of the plume on September 24. You can view more of his photographs on flickr and Instagram.

Activity at the Indonesian volcano Anak Krakatau is not unusual; eruptions have occurred sporadically over the past few decades. And before that, it was the site of the infamous, deadly eruption of 1883. It is somewhat unusual, however, for satellites to get cloud-free views, as they did in September 2018.

Anthony Watts
Watts Up with That