Is the earth moving in Folsom, California? Several large cracks over the weekend appeared in and around a Folsom home, and no one seems to know why.

Pearl Wood, who discovered the cracks explains: The ground just started shaking and I looked down and these cracks started appearing and I jumped back and the cracks just kept appearing where I was jumping. A nightmare!

Is the earth moving in Folsom? In last 48 hours, massive cracks have popped up at this woman's home, and no one knows why @ABC10 pic.twitter.com/VUotVXRneb

Is the earth moving in Folsom? In last 48 hours, massive cracks have popped up at this woman’s home, and no one knows why. There is even a giant crack in another part of her yard that led all the way up to her house. 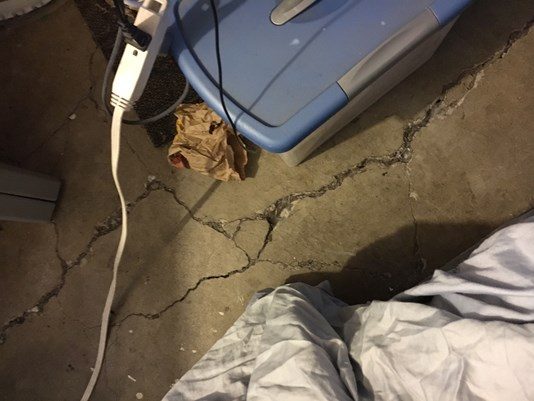 Some large cracks are opening around a house in Folsom, California and nobody knows why! via ABC 10

There is also cracks in the walls of the living room and her daughter’s bedroom, as well as along the floor of the garage.

Wood called the fire department. They did say that there’s no water damage from this. They said that there’s no sink holes in Folsom. They all said they don’t know what’s going on.. Following this link, you will listen to Wood explaining what is really going on at her home:

Although the city inspectors told her it was safe to live there, you understand now why she doesn’t feel that way.

Wood suffers from PTSD from her time spent in Iraq and receives monthly support from the VA. Her daughter is on the Autism spectrum.

These cracks are really weird. Could it be linked to a new drought in California?

Leave a Reply to Terral BlackStar