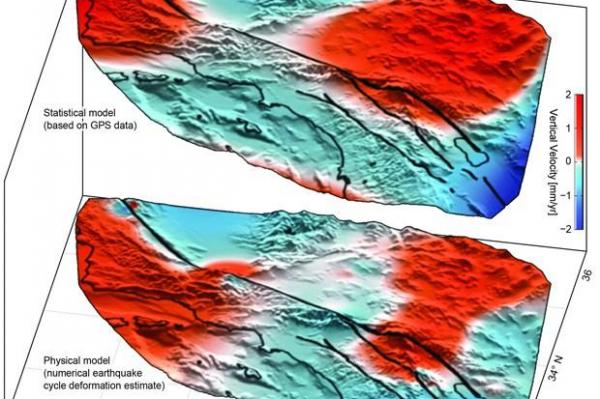 “We were able to break down the noisy signals to isolate a simple vertical motion pattern that curiously straddled the San Andreas fault,” researcher Samuel Howell said.

Analysis of GPS data has revealed new areas of motion around the San Andreas Fault System.

Using data collected by the EarthScope Plate Boundary Observatory’s GPS array, researchers identified 125-mile-wide “lobes” of uplift and subsidence. Over the last several years, the lobes, which straddle the fault line, have hosted a few millimeters of annual movement.

Computer models simulating the San Andreas Fault System have predicted such crustal movement, but the areas of motion hadn’t been physically identified until now.

Researchers used advanced statistical modeling to identify the movement among the inevitable statistical noise that comes with monitoring minute movements in the Earth’s crust.

“While the San Andreas GPS data has been publicly available for more than a decade, the vertical component of the measurements had largely been ignored in tectonic investigations because of difficulties in interpreting the noisy data,” lead author Samuel Howell, a researcher at the University of Hawaii at Manoa, explained in a news release. “Using this technique, we were able to break down the noisy signals to isolate a simple vertical motion pattern that curiously straddled the San Andreas fault.”

The validity of the vertical patterns was confirmed by the fact that similar motions were predicted by an earthquake model designed by researchers at the University of Hawaii’s School of Ocean and Earth Science and Technology.

“We were surprised and thrilled when this statistical method produced a coherent velocity field similar to the one predicted by our physical earthquake cycle models,” said researcher Bridget Smith-Konter. “The powerful combination of a priori model predictions and a unique analysis of vertical GPS data led us to confirm that the buildup of century-long earthquake cycle forces within the crust are a dominant source of the observed vertical motion signal.”