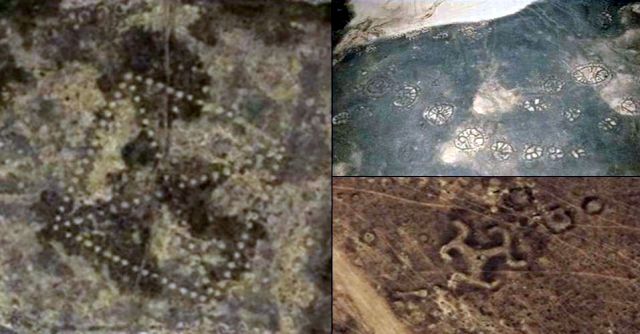 Kazakhstan is the ninth largest country in the world, larger than Western Europe, and extends from the Caspian Sea on the west to Mongolia on the east; from Russia in the north to Uzbekistan, Kyrgyzstan and China in the south. Kazakhstan was the second largest republic in Russia until the 1991 collapse of the U.S.S.R.

Kazakhstan has been inhabited for a long time and it is thought those people were the first humans to domesticate and ride horses. In fact, the name, Kazakhstan, is from an old Turkic word that meant “independent, a free spirit.”

Wikipedia – The Turkic peoples are a collection of ethnic groups that live in northern, eastern, central, and western Asia, northwestern China, and parts of eastern Europe and are part of the Turkic/Altaic language family.

Now in 2015, NASA has taken interest in photographing from the International Space Station unusual and very large geoglyphs discovered in the southern Kostanay region and Turgay steppes of northern Kazakhstan. More and more of the unique and mysterious geoglyphs keep being discovered and the number is now over 200. Their ages are between 3,000 and 7000 years or older and they can only be viewed from high in the air.