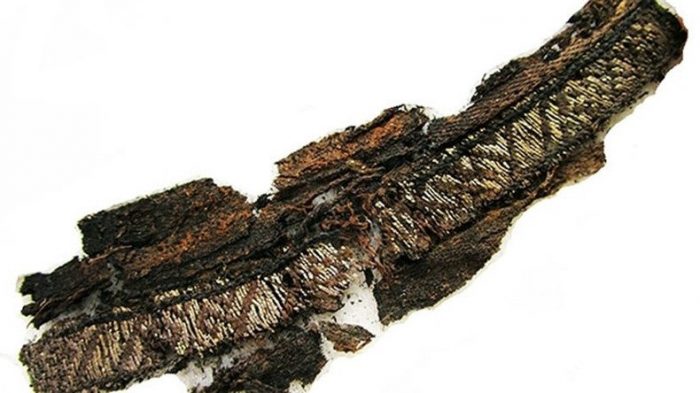 Archaeologists studying clothing worn by ancient Vikings have found evidence of a link between the Nordic tribes and Islam.

Researchers from Sweden’s Uppsala University examined garments uncovered at 9th and 10th-century burial sites. They found that what they thought were typical Viking Age patterns in silver bands and embroidered clothing, were actually Kufic characters invoking both ‘Allah’ and ‘Ali,’ two central figures in the Islamic faith.

Kufic, an ancient Arabic script dating back to the 7th century, appeared in Viking Age chamber graves and boat graves in areas around the capital Stockholm. Astonishingly, the same characters can also be found in mosaics on burial monuments and mausoleums in Central Asia.

Annika Larsson, researcher in textile archaeology at the Department of Archaeology and Ancient History at Uppsala University, believes that the presence of the Kufic characters at two different grave sites suggests that Viking funeral customs were influenced by Islam.

“Presumably, Viking Age burial customs were influenced by Islam and the idea of an eternal life in Paradise after death,”Larsson told the university’s website.

“Grave goods such as beautiful clothing, finely sewn in exotic fabrics, hardly reflect the deceased’s everyday life, just as little as the formal attire of our era reflects our own daily lives. The rich material of grave goods should rather be seen as tangible expressions of underlying values.”

In Valsgarde, a farm north of Gamla Uppsala, greater amounts of silk were found in the clothing of those buried there than wool and linen. Larsson believes this is indicative of an Islamic influence.

“In the Quran, it is written that the inhabitants of Paradise will wear garments of silk, which along with the text band’s inscriptions may explain the widespread occurrence of silk in Viking Age graves,” she said.

Speaking to Finnish national broadcaster Yle, Larsson hit back at negative reactions to the link between Islam and Scandinavians who wish to preserve the idea of their “pure” Nordic roots.

“The negative reactions have come from xenophobes, without any exceptions,” she said.

“It’s the Muslim connection that they find particularly disturbing. I do not want to go into what they say, but it’s not nice.”